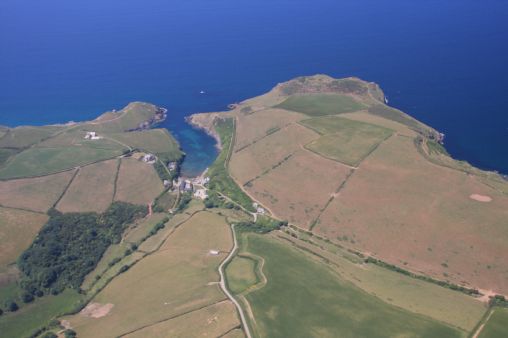 Port Quin is a small rocky inlet which offers sheltered swimming, plenty of rockpools to explore and a unique charm and character.

The name is a corruption of the Cornish 'Porth Gwynn' meaning 'white cove'.

Formerly a bustling fishing village, in 1841 it had 23 cottages with 94 inhabitants, it is now a quiet and peaceful place to wile away a summers day.

The inlet provided a sheltered haven for fishing and trading vessels. Vessels unloaded coal for the local mines and manure for farming and loaded lead and antimony for export. The villagers made their meagre living from pilchard fishing and had to survive for 7 months of the year on the short pilchard season which lasted from August to September. A number of market gardens in the valley provided some employment.

Local legend tells that the village has been abandoned by its population twice in its history. The first time when the pilchard shoals deserted this part of the coast and the second time, in the 19th century, when all the local fishermen were lost at sea in a terrible storm leaving 32 women widowed. The wives of the fisherman stayed for a time but were unable to eke out a living and finally moved away. There is little documentation about the desertion of the village. The villagers may have just moved on to nearby villages when mining and fishing went into decline and some of them may have emigrated to Canada but no ones knows exactly what happened. Local people still refer to Port Quin as "the village that died".

It is recorded that in the winter of 1697 a terrible storm destroyed Port Quin's herring fleet but there are no details of casualties or lives lost.

Today there are a few stone cottages at Port Quin, some converted from fish cellars. Most of the village is in the care of the National Trust.

Port Quin's unique unspoiled nature has made it a popular location for film and television producers. During the 1970s the village was featured in the BBC television series, Poldark, dramatised from Winston Graham's novels. In the 1990s, the film Amy Foster shot many of its scenes here. The village also inspired the novelist Marcia Willet in the writing of 'The Golden Cup'.

There are excellent walks in the area, with the rocky coastline being particularly steep and impressive.

To the south of Port Quin is the headland of Doyden Point, complete with its folly. To the north is Port Isaac.

Dolphins can often be seen in Port Quin Bay so keep your eyes open when walking along the coast path. Sealife off Port Quin also includes the beautiful gorgonian coral, Pink Sea Fan, which have a colony around Mouls Island. Rockpools contain a variety of marine wildlife including on occasion, lobsters. Wild Fennel grows abundantly around the village.

During the winter the inlet at Port Quin channels the rough seas to produce a fantastic display of tall, roaring foamy waves.


Do you have information of a historic or community interest about Port Quin which you would like featured on this page please email us with your information.

Businesses
in or around Port Quin 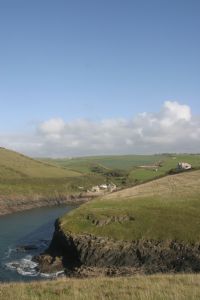