Cornwall > A to Z > Tintagel and North Cornwall > Poundstock 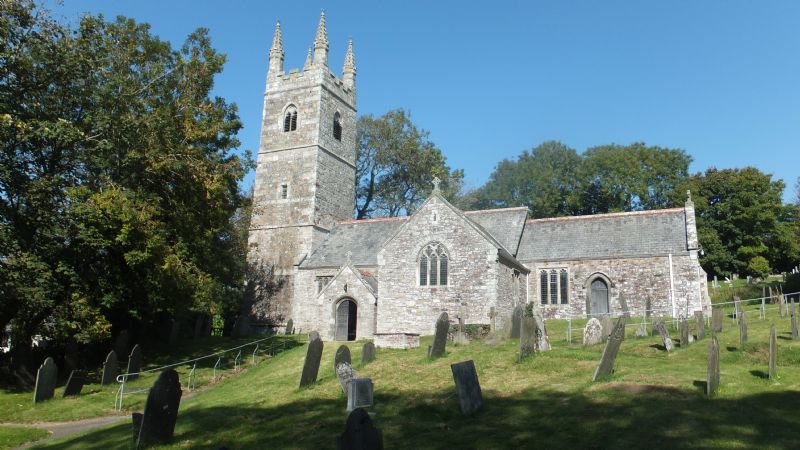 Poundstock, in Cornish, Korlan, is a civil parish and a hamlet on the north coast of Cornwall.

The manor of Poundstock was mentioned in the Domesday Book (1086) when it was held by Jovin from Robert, Count of Mortain. Before 1066 it had been held by Gytha who paid tax for one virgate of land but there was one hide of land and land for 6 ploughs. There were 2 ploughs, 1 serf, 1 villein, 3 smallholders, 10 acres of woodland, 40 acres of pasture, 10 cattle and 50 sheep. The value of the manor was £1; "this land is of St. Kew's".

The name Poundstock is Saxon and means 'cattle enclosure'. The cattle pound was a feature of the village for centuries.

Only a short distance from the rugged north coast, Poundstock, in the 14th century, was a centre for piracy smuggling. In 1348 its population was devastated the Black Death. Smuggling and wrecking resumed at a later date.

In 1357, during a time of fierce rivalries between thieves and pirates in the parish, the assistant curate, William Penfound, was hacked to death at the altar of Poundstock Church. Some say that even today, his ghost may still be seen.

The churchtown is home to the parish church dedicated to St Winwaloe. The church is from the medieval period. It has a nave, chancel, north transept, north aisle and west tower. Parts of the church date from the 15th century including the aisle.

The font appears to be from the 13th century. Its tower houses a ring of six bells., restored in 2000. The pulpit dates from the Jacobean period. Three frescoes on the north wall depict the Tree of Deadly Sins, the Warning to Sabbath-breakers and the Weighing of Souls.

The church was restored by Sedding so it has maintained its traditional appearance.

Poundstock always held a fair on Rogation Monday. The Dedication Festival is still observed on that day, the Monday before Ascension Day.

In 1282,The Archbishop of Canterbury visited the parish after the Rector of Morwenstow seized the church and installed his own incumbent. As soon as the Archbishop left, his incumbent was again removed.

In the churchyard, adjacent to the church is Poundstock Gildhouse, a Grade I listed building. This Tudor building is the only surviving one of its kind in Cornwall. It was built between the 15th and 16th centuries using traditional materials such as cob, local stone and slate.

Originally, the ground floor would probably have housed a kitchen, bakehouse and brewhouse, a meeting place and a store room. The first floor would have been an open feasting hall where the Church Ales were held.

Church Ales were seasonal celebrations, particularly at Whitsuntide and May Day, when ales were brewed and sold to raise funds for the Church or for charitable contributions within the parish.

During the late 17th century, with the advent of Puritanism, this traditional practice changed . Consumption of alcohol was viewed as sinful so Church houses were slowly abandoned or used for other activities.

The Gildhouse has been used continuously since it was built and today is a meeting place for community activities. Every Wednesday, between Easter and October it is open to visitors.

Restored in 2007-8 it won the Royal Institute of British Architects South West Town and Country Conservation award for 2009. Then in March 2012 the Gildhouse won the European Union laureate for cultural heritage/Europa Nostra award in the conservation section and was given the Europa Nostra Grand Prix.

John Penrose, Vicar of Poundstock during the 19th century, was a theological writer with several published works between 1805 and 1850.

The Poundstock Packet , a free community magazine is distributed to homes within the parish.


Do you have information of a historic or community interest about Poundstock which you would like featured on this page please email us with your information.

Four miles (6.5 km) south of Bude, a half mile west of the A39 road and one mile from the north coast.

Businesses
in or around Poundstock