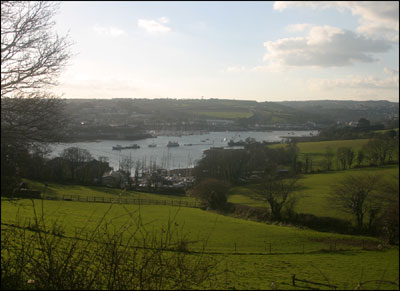 The River Fal has its source at Pentivale in Roche in Cornwall's china clay producing district and flows for a distance of fifteen and a half miles to its estuary at Falmouth.

The young river gives no hint of the magnificent broad natural harbour into which it matures at Falmouth, one of the largest natural harbours in the world.

The Fal River crosses Goss Moor, a National Nature Reserve, of international importance for its heathland and for its wetland environment of both heath and wet woodland.

Passing Retew, the site of an ancient ford, the Fal reaches Trenowth Bridge which at one time marked the tidal reach of the river. Over many centuries the upper reaches of the River Fal have become silted up by sand and mud created in part by the extraction of china clay but a process that was taking place hundreds of years before china clay was discovered.

Grampound,from the Norman French meaning 'great bridge' came into existence in the 13th century. Part of the ancient Manor of Tybesta, the Lord of the Manor was in charge of the Fal's fisheries and held other rights over the use of the river.

The Fal now travels past Creed before reaching the old borough town of Tregony, another bridging point and the area at which the Fal begins to widen as it heads for the Carrick Roads.

For much of the Fal's journey on this stretch of its course, it is flanked by woodland, Lanihorne Wood and Lamorran Wood in an area which is popular for wildlife including fallow deer, peregrine falcons and buzzards.

At Sett Bridge, near Ruan Lanihorne, the freshwater River Fal has its first taste of the sea as this area marks the tidal reaches of the river. There are bird watching facilities in the area with a hide for the use of members of the Cornwall and Birdwatching and Preservation Society. Shortly after Sett Bridge, the River Fal is joined by the Ruan River, one of its tributaries which flows through winding creeks up to the village of Ruan Lanihorne.

Downstream from here the Fal sweeps in a great curve, Ardevora is noted for its birdlife, particularly its wildfowl and waders.

The Truro River joins the River Fal at Tolverne Passage just below Tregothnan Park, a private estate. At this point you can follow the river to Truro or head for its estuary at Falmouth. The ten mile stretch of water between Truro and Falmouth provides amazing views of the river and its creeks and is well worth exploring.

Proceeding onwards towards Falmouth, the River Fal passes through King Harry Passage. The channel here is very deep, up to 14 metres, allowing for the mooring of large vessels who lay up here in the shelter of the Fal. Tales are told of divers who encountered large conger eels on this stretch of the river, so big and menacing that the diver's hair turned white overnight!

At Turnaware Point the River Fal enters the Carrick Roads, a broad expanse of water bounded by the parishes of St Just in Roseland, Feock and Mylor.

The Carrick Roads and its creeks are extremely popular with all types of leisure activities from water based activities of sailing, windsurfing, gig racing, speedboats, water skiing, jet skiing, diving, parascending and guided pleasure cruises to angling, birdwatching and walking. The entire reach of the River Fal has around 4,500 moorings available to leisure craft including deep water and beach mooring.

As we proceed towards the estuary of the Fal, Mylor Creek winds its way inland to Mylor Bridge. Mylor Churchtown stands at the entrance to the creek. Around Trefusis Point, the Penryn River joins the Carrick Roads with the town of Falmouth at its mouth and the ancient borough of Penryn at its head. The village of Flushing stands on the northern bank of the Penryn River.

Across Carrick Roads, east of Falmouth is the harbour and village of St Mawes.

Pendennis Point and St Anthony Head with its lighthouse, mark the mile wide entrance to the Carrick Roads. The entrance to the river is very deep. On entering or leaving the River Fal attention should be taken of Black Rock. You can pass either side of it and it is well marked by an east cardinal buoy. Black Rock's approximate position is 50 degrees 08.68 minutes N 05 degrees 01.92 minutes W.


Do you have information of a historic or community interest about River Fal which you would like featured on this page please email us with your information. 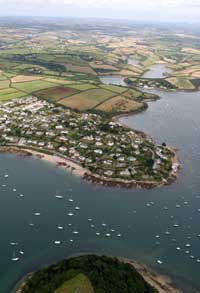