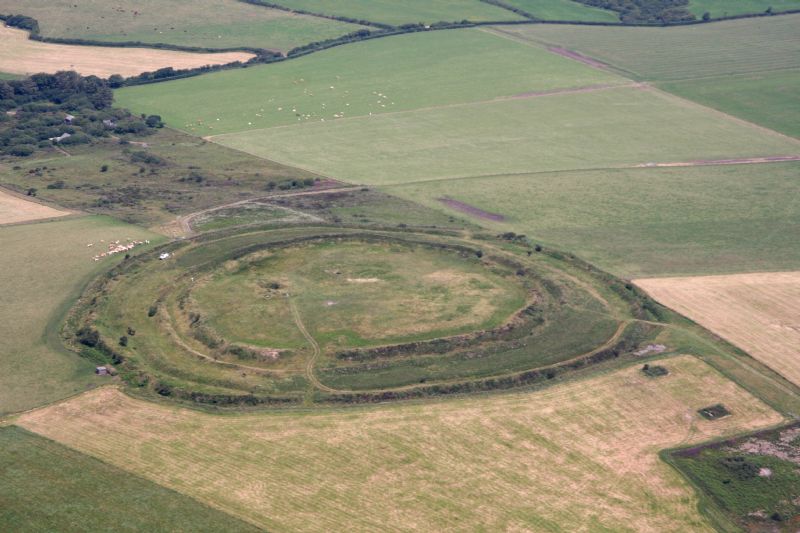 Castle an Dinas, near St Columb Major is an Iron Age hillfort dating from around the 3rd century BC.

The fort is trivallate, consisting of three ditches and ramparts in concentric rings. It stands on the summit of Castle Downs, 850 ft (259 m) above sea level.

Castle and Dinas was excavated during the 1960s by Dr Bernard Wailes.

There are two Bronze Age barrows at Castle an Dinas.

In later history, King Arthur is associated with this area. Castle an Dinas is reported to have been the hunting seat of Arthur when he rode in the local Tregoss Moor hunt. In St Columb is a stone bearing four footprints said to have been made by Arthur's horse.

William of Worcester visited Cornwall in 1478 and in his history he wrote how the legend states that Castle an Dinas was the place where Gorlois, Duke of Cornwall died. Gorlois was the husband of King Arthur's mother.

In March 1646, during the English Civil War, Royalist troops led by Sir Ralph Hopton camped at the fort for two nights. They held a Council of War here and made the decision to surrender to the Parliamentarians. The vote was almost unanimous with only Major General Webb and Hopton himself voting against it. They surrendered a few days later at Tresillian Bridge, near Truro.


There is an annual Midsummer's eve bonfire, in Cornish, Tansys Golowan, held atop Castle an Dinas by the local Old Cornwall Society.

Please keep your dog on a lead at all times when walking in this area. A number of lambs were mauled to death on 31st July 2018. Please make sure you're a thoughtful and responsible dog owner.

During the 18th century an unusual event was recorded by Samuel Drew, a Cornish historian. A ghost army was reported to have been seen in the sky above Castle an Dinas.

In the mid 19th century an old gentlemen from the nearby hamlet of Quoit reported to Henry Jenner that he had witnessed the ghosts of King Arthur's army at Castle an Dinas exercising in the moonlight.

A rather gruesome story is recorded of John Trehenban (1650–1671), a resident of St Columb Major. At age 21, he is said to have murdered two young girls. He was sentenced to imprisonment and his punishment was to be locked in a cage on Castle and Dinas, where he would be left to starve to death.

The Parish Register lists the murder of Anne, daughter of John Pollard and Loveday, daughter of Thomas Rosevear of St Enoder.

Trehenban joined the hunt for the murderer, riding on horseback following the bloodhounds. It is said that his hat blew off and the dogs were so interested in its scent that they would not leave it. Eventually this forced his confession.

He was placed in a cage which stood on a large rock. Starving, he begged a passerby for food but all they had were a few tallow candles. He took and ate them.

Local people used to say that if you ran around this rock fifty times you would hear his chains rattle.

According to Marshel Arthur, a local historian, people from this area used to refer to a no-good person as 'a right Tremmon'.

The stone on which Trehenban's cage stood can still be seen at Castle an Dinas. The lane where the dogs picked up the scent is still known as 'Tremmons Lane'.

Between 1916 and 1957 Castle and Dinas was the site of Cornwall's largest wolfram mine. Many of the old buildings and workings remain standing today.


Do you have information of a historic or community interest about Castle-an-Dinas which you would like featured on this page please email us with your information.

Businesses
in or around Castle
an
Dinas