Culture and Tradition in Cornwall


Cornish culture and traditions are alive and well in many aspects of life in Cornwall. From traditional rural Cornish industries such as farming, fishing, tin streaming, thatching and the building of Cornish hedges to the Old Cornwall Societies, Cornish language and the Gorseth Kernow.

The Federation of Old Cornwall Societies (FOCS) was formed in the early part of the 20th century, around 1924, with the objective of collecting and maintaining "all those ancient things that make the spirit of Cornwall - its traditions, its old words and ways, and what remains to it of its Celtic language and nationality" ( R.Morton Nance, Old Cornwall 1925). This aim is enshrined in its motto "Kyntelleugh an brewyon es gesys na vo kellys travyth - Gather ye the fragments that are left, that nothing be lost".

The first Old Cornwall Society was pioneered by St Ives in 1920 and the Federation of Old Cornwall Societies today represents 47 groups spread throughout Cornwall from Bude and Stratton in the North to Saltash in the East, The Lizard in the South and St Buryan in West Cornwall. 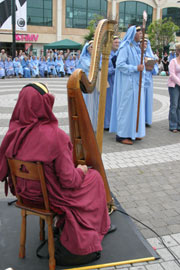 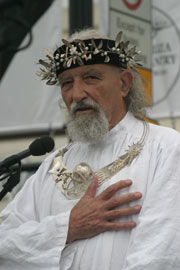 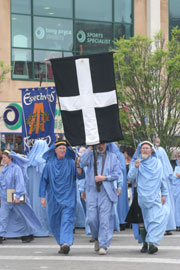 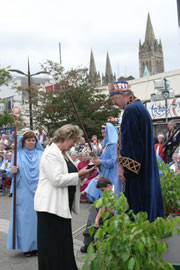 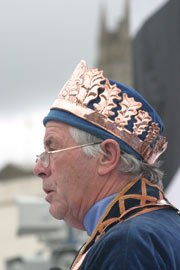 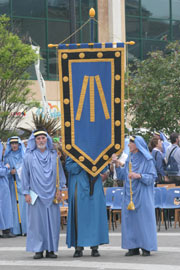 Photos from the Gorseth Kernow 2004, Truro

On 21st September 1928, Pedrog, the Archdruid of Britain inagaurated the first Gorsedd of Cornwall to represent the Celtic and national aspects of Cornish culture. Henry Jenner was installed as Grand Bard and twelve bards were created to join the nucleus of eight Cornish men and women, who had, in
preparation, been made bards at the Welsh Gorsedd. Gorseth Kernow is an annual meeting of Cornwall's bards which celebrates Cornwall's Celtic traditions and awards the status of bard on those
individuals who have earned the honour through their services to Cornwall and its culture.

In September 2004 the Cornish Gorsedd was held at Lemon Quay, Truro. The ceremony begins with the sounding of the "Corn Gwlas" - horn - issuing a symbolic call to the four points of the compass. The Gorsedd prayer, written in 1924 by W. S. Gwynn Williams, is then heard. The Ceremony of Peace is performed by the Grand Bard and the Gorsedd is then declared open. The Ceremony offering Fruits of the Earth is made by the Lady of Cornwall. Former bards are commemorated and new bards are initated.

Awards are presented to individuals who have contributed to the promotion and furtherance of Cornish culture both in the U.K. and throughout the world.

For individuals undertaking research or for information on Cornish subjects, The Cornwall Centre at Redruth is home to the new Cornish Studies Library and contains a wealth of information from an archive of Cornish newspapers, periodicals, books and leaflets to maps, photographs and census returns.

Agan Tavas (Our Language) The Society for the Promotion of the Cornish Language www.agantavas.com/

Click here to find
accommodation for
Culture and Tradition