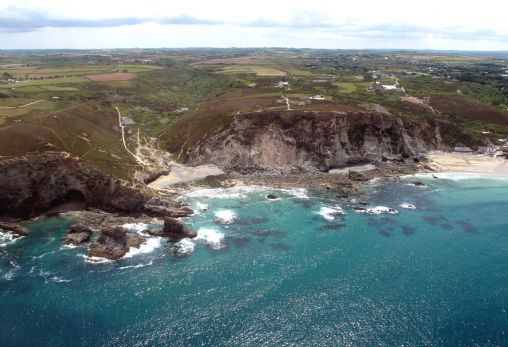 St Agnes from the air - Trevaunance Cove and Trevellas Porth

St Agnes is a charming town on Cornwall's north coast with a great surfing beach and excellent local facilities.

A Voluntary Marine Conservation Area is in operation around St Agnes and visitors can enjoy exploring a wealth of sea life around the beach and rock pools of Trevaunance Cove.

Approaching Trevaunance Cove along the coast path from Trevellas Porth the views of the coastline and Trevaunance are magnificent but do not stray too close to the cliff edge.

There are many seating areas above Trevaunance Cove, all positioned very thoughtfully to enjoy the wonderful views including the lovely 'Down Quay Garden', created in 2006 by a group of volunteers on land gifted to St Agnes parish by the Lethbridge family.


Film and TV at St Agnes

Several films have been made in and around St Agnes.

THIS mighty man held especial possession of the hill for merly known as Car-ne Bury-anacht or Bury-anack; “the spar stone grave,” sometimes called St Agnes’ Ball and St Agnes’ Pestis, but which is now named, from the use made of the hill during the long war, St Agnes’ Beacon He has left his name to a very interesting, and undoubtedly most ancient earthwork, which still exists at the base of the hill, and evidently extended from Trevaunance Porth to Chapel Porth, enclosing the most important tin district in St Agnes.

This is constantly called “The Bolster.” Bolster must have been of enormous size: since it is stated that he could stand with one foot on St Agnes Beacon and the other on Carn Brea ; these hills being distant, as the bird six miles, ** his immensity will be clear to all. In proof of this, there still exists, in the valley running upwards from Chapel Porth, a stone in which may yet be seen the impression of the giant's fingers.

On one occasion, Bolster, when enjoying his usual stride from the Beacon to Carn Brea, felt thirsty, and stooped to drink out of the well at Chapel Porth, resting, while he did so, on the above-mentioned stone. We hear but little of the wives of our giants; but Bolster had a wife, who was made to labour hard by her tyrannical husband. On the top of St Agnes' Beacon there yet exist the evidences of the useless labours to which this unfortunate giantess was doomed, in grouped masses of small stones. These, it is said, have all been gathered from an estate at the foot of the hill, immediately adjoining the village of St Agnes. This farm is to the present day remarkable for its freedom from stones, though situated amidst several others, which, like most lands reclaimed from the moors of this district, have stones in abundance mixed with the soil.

Whenever Bolster was angry with his wife, he compelled her to pick stones, and to carry them in her apron to the top of the hill. There is some confusion in the history of this giant, and of the blessed St Agnes to whom the church is dedicated. They are supposed to have lived at the same time, which, according to our views, is scarcely probable, believing, as we do, that no giants existed long after their defeat at Plymouth by Brutus and Corineus. There may have been an earlier saint of the same name; or may not Saint Enns or Anns, the popular name of this parish, indicate some other lady?

Be this as it may, the giant Bolster became deeply in love with St Agnes, who is reputed to have been singularly beautiful, and a pattern woman of virtue. The giant allowed the lady no repose. He followed her incessantly, proclaiming his love, and filling the air with the tempests of his sighs and groans. St Agnes lectured Bolster in vain on the impropriety of his conduct, he being already a married man. This availed not; her prayers to him to relieve her from his importunities were also in vain. The persecuted lady, finding there was no release for her, while this monster existed, resolved to be rid of him at any cost, and eventually succeeded by the following stratagem:-- Agnes appeared at length to be persuaded of the intensity of the giant's love, but she told him she required yet one small proof more. There exists at Chapel Porth a hole in the cliff at the termination of the valley. If Bolster would fill this hole with his blood the lady would no longer look coldly on him.

This huge bestrider-of-the-hills thought that it was an easy thing which was required of him, and felt that he could fill many such holes and be none the weaker for the loss of blood. Consequently, stretching his great arm across the hole, he plunged a knife into a vein, and a torrent of gore issued forth. Roaring and seething the blood fell to the bottom, and the giant expected in a few minutes to see the test of his devotion made evident, in the filling of the hole. It required much more blood than Bolster had supposed; still it must in a short time be filled, so he bled on. Hour after hour the blood flowed from the vein, yet the hole was not filled. Eventually the giant fainted from exhaustion. The strength of life within his mighty frame enabled him to rally, yet he had no power to lift himself from the ground, and he was unable to stanch the wound which he had made. Thus it was, that after many throes, the giant Bolster died !

The cunning saint, in proposing this task to Bolster, was well aware that the hole opened at the bottom into the sea, and that as rapidly as the blood flowed into the hole it ran from it, and did

"The multitudinous seas incarnadine,
Making the green one red."

Thus the lady got rid of her hated lover; Mrs Bolster was released, and the district freed from the presence of a tyrant. The hole at Chapel Porth still retains the evidences of the truth of this tradition, in the red stain which marks the track down which flowed the giant's blood.

There is another tradition, in some respects resembling this one, respecting a giant who dwelt at Goran, on the south Coast.

Bury, Saxon for grave. This does not appear to be Cornish, which is bedh; Welsh, bedd.


Where to Stay in St Agnes

The village contains good local facilities including accommodation, restaurants, a Post Office and supermarket. For holiday accommodation in and around St Agnes see Where to Stay in St Agnes on this page or visit our Cornwall Accommodation.


Do you have information of a historic or community interest about St Agnes which you would like featured on this page please email us with your information.

Location:
Located on the North Coast between Porthtowan and Perranporth. 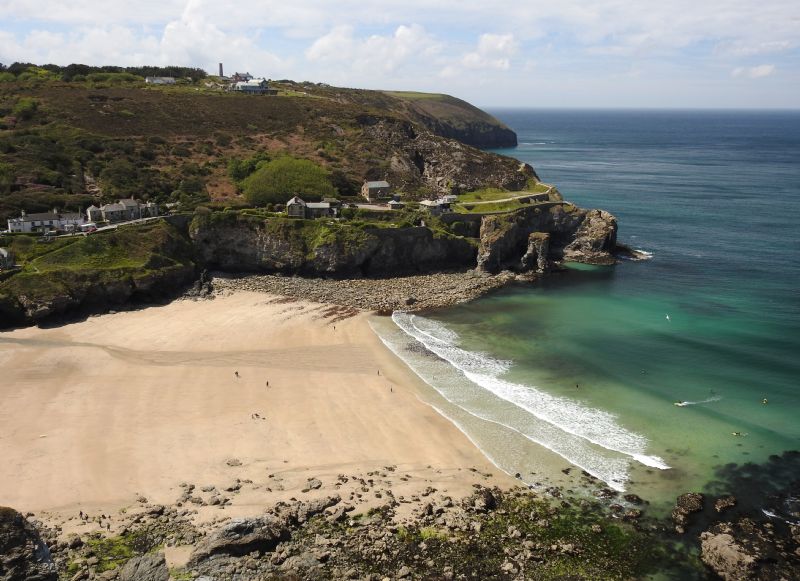 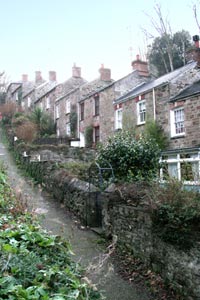