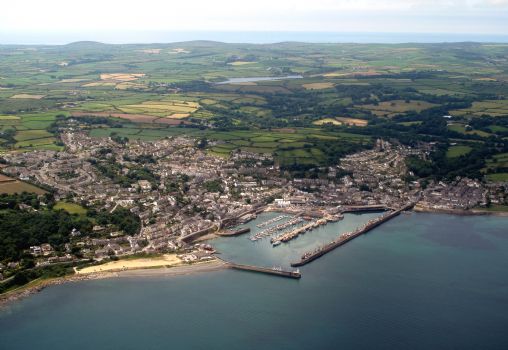 Newlyn is famous as the home of the Newlyn School of Art which was established here in the late 19th century and is today a charming harbourside town with its own Cornish fishing fleet.

The harbour has been in existence for hundreds of years and was already in operation by 1400s. Added to over time, in the 1880s the huge jetties were built which now enclose the harbour. Newlyn is the largest port for the landing of fish in the whole of England and Wales, with a fleet today of over 200 vessels.

Newlyn was destroyed during the Spanish Raid of 1595.

In 1620 The Mayflower stopped off at Newlyn old quay to take on water, after finding that the water from Plymouth was contaminated.

In 1800, Newlyn was the birthplace of William Lovett a leader of the Chartist movement.

During the 1800s, Newlyn was the scene of a civil disturbance known as the Newlyn riots. The riots resulted from protests over the landing fish on a Sunday by fishermen from the north of England. The Cornish fisherman, as members of the Methodist church had strong views about the keeping of the sabbath.

The Newlyn School of Art was established here around the 1880s when the artist Stanhope Forbes came to paint here, drawn by the clearness of the light. Many artists followed his example and came to join him and so the Newlyn School was born. Artists such as Norman Garstin, Dame Laura Knight, Samuel 'Lamorna' Birch, Walter Langley, Edwin Harris are just a few of the many who became known as synonymous with the Newlyn School.

Newlyn is the home of The Tidal Observatory. The observatory was founded to identify the mean sea level that forms the starting point for levelling in the whole UK. This brass bolt is the benchmark for the whole of the United Kingdom. All heights are referenced to this point.

To identify the height for the benchmark, visual observations of the water level were made using a tide staff every 15 minutes, 24 hours a day, 365 days a year for a period of six years between 1915 and 1921.

The data collected during those six years was used to calculate the mean sea level and this vertical level was transferred to the head of the brass bolt.

In 1937 the fishing vessel Rosebud sailed to London to deliver a petition to the Minister of Health on behalf of those villagers whose homes were threatened under the government's slum clearance scheme.

There is a beach at Newlyn Green which hosts the annual Raft Race.


The Newlyn River passes through the town entering the sea here.

An RNLI lifeboat is stationed in the harbour.

Newlyn has a fine display of Christmas lights every year from December through to January when the town and harbour are transformed into a glittering spectacle of illuminations.

The town has a good range of shops and facilities. See local resources below for more information.

The beach has an all year round dog friendly policy and responsible dog owners are welcomed.


Do you have information of a historic or community interest about Newlyn which you would like featured on this page please email us with your information.

Location:
Located on the South coast in West Cornwall.

The Ocean Pride Returns to Newlyn

Properties in or around Newlyn available