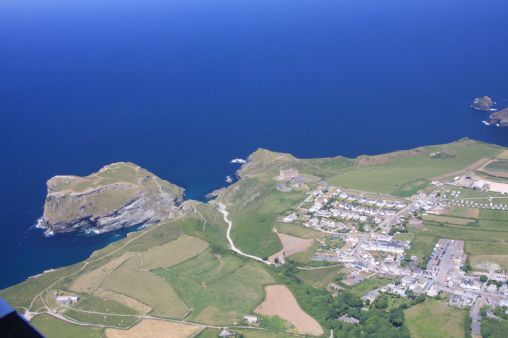 Tintagel and the Island

Tintagel, on Cornwall's north coast, is famous for its association with King Arthur and the Knights of the Round Table.

The town contains numerous references to Arthurian legend including the castle which is believed to have been his stronghold and a fine collection of stained glass windows depicting scenes of the Knights.

The cliffs and coastal scenery are magnificent and it is easy to imagine Arthur and his Knights in such a rugged and powerful setting. A great cave associated with the wizard Merlin can be viewed from the coastal footpath and the whole area is well worth visiting and exploring. To explore the cave you can enter from Tintagel Haven at low water and it is possible to walk right through the cave to Westside Cove. Exercise caution and it is best if you take a torch.

Two holy wells can be seen in Tintagel, one located at Trethevy and the other on The Island.

Trethevy Well is opposite the church of St Perran. It is roofed and has been restored using parts of its old masonry.

For those with an interest in archaeology, the whole area of Tintagel Island and its environs is a fascinating place to explore.

The dramatic ruins of Tintagel Castle stand on the Island dominating the 300ft (90m) high cliffs.

It was believed that the building of the castle began around 1,140 years ago, by Reginald, Earl of Cornwall (son of Henry I) but archaeological research has since suggested a slightly later period and that it was Richard, Earl of Cornwall (brother of Henry III), who built the castle in 1233. During the 1300s, in the time of Edward, the Black Prince, the castle was no longer occupied by the Earls of Cornwall and was given to the County Sheriff who used part of it as a prison. The land on the island was let to pasture and the castle was allowed to gradually fall into ruins after the roof of the Great Hall was removed during the 1330s.

During the early 1540s, John Leland visited. The access to the Island at that time was a bridge of tree trunks, such was the erosion of the isthmus. Later in the 1500s when the country was threatened by Spanish invaders, the defences were strengthened at the Iron Gate.

Archaeological excavations on Tintagel Island have only explored around 10% of the site but have produced more Mediterranean pottery than has been found in any site in Western Europe showing how important Tintagel Island was as a place of trade.

There are a number of climbs on the crags on the Island but climbers must first write to English Heritage to get permission to use them.

In the 1650s, the manor of Tintagel was seized by Oliver Cromwell's Commonwealth government. It returned to the Duchy of Cornwall in 1660.

Tintagel's parish church dedicated to St Materiana, stands on Glebe Cliff just outside the village. There are the remains of an ancient earthwork enclosure just to the north west of the church.

What we know today as the village of Tintagel, was until the 1850s, known as Trevena. It was only when the area became a tourist destination because of the fascination of the Arthurian legends that the name Tintagel began to be used.

This area is important for its natural history and is designated as a Site of Special Scientific Interest. It provides an ideal breeding ground for colonies of sea birds, butterflies and even small lizards.

The name of the castle is first recorded in the 12th Century as Tintagol. It is believed to be either Norman-French in origin or with a Cornish influence from dinas meaning fort/castle.

A wide range of accommodation and local services are available. Please see below.


Do you have information of a historic or community interest about Tintagel which you would like featured on this page please email us with your information.

Location:
Located on the coast in North Cornwall. Easily accessed from the A39 trunk road from Wadebridge to Bude and the B3263.