Botallack to Cape Cornwall - looking back at West Wheal Owles 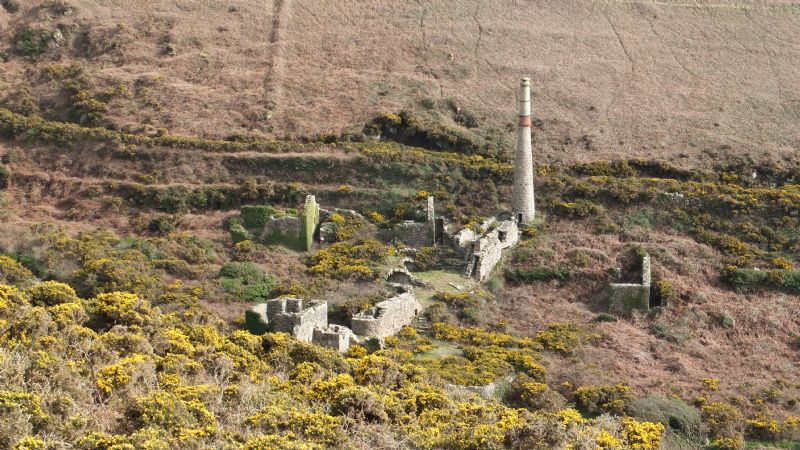 This section of the coast path continues through one of the most intensively mined areas in Cornwall - the St Just mining area. You will pass the remains of engine houses, many of them very well preserved, one of which has featured prominently in the latest adaptation of Poldark. As you near Cape Cornwall you will pass an Iron Age cliff castle and descend into the Kenidjack Valley, once home to 50 working waterwheels.

If you are looking for refreshments before starting your walk, the Queens Arms pub in Botallack is open all day.

If you are starting your walk here you can park in a parking area near the Botallack Mine Count House.

Walk down to the coast path through the remains of the Botallack Mine. This mine covered a large area incorporating several older mines - Carnyorth (Nineveh), Grylls Bunny, Parknoweth, Wheal Cock, Wheal Hazard, Wheal Hen, Wheal Tolvan and cliff outcrops - into the Botallack Mine sett.

On joining the coast path follow it to the left.

The chimney belongs to the arsenic calciner, a labyrinth of tunnels for extracting and processing arsenic. The buildings have been decontaminated.

Continue along the path, not forgetting to look back to see magnificent views of the Crowns engine houses.

On your left is West Wheal Owles (Cargodna shaft) used as Ross Poldark's Wheal Leisure in the latest series of Poldark. Leave the coast path briefly to get the best view of this pumping engine house. There is a plaque near the engine house commemorating the twenty workers who died here in 1893 when they were drowned by a breach into the flooded old workings (known as a House of Water) of Wheal Drea mine. Rejoin the coast path.

The wall standing nearby is all that remains of the mine's winding engine house.

One of the many zawns in the cliffs here, Loe Warren Zawn, has produced over 27 different minerals including various copper minerals and some very unusual rare minerals such as Widenmannite.

The next engine house you see a little further on your right is Wheal Edward. The engine housed here ran over 30 heads of Cornish stamps. There are the remains of a large buddle and the ore dressing floors amongst the vegetation. Pitchblende, a uranium ore was found here, some of which was sent to Madame Curie in France.

In the cliff below the mine is Wheal Edward Zawn. Zawn is from the Cornish word sawen or saven, meaning a deep and narrow sea inlet with steep sides.

North Zawn is the next feature in the cliff. Widenmannite, a rare mineral - uranyl lead carbonate has been found here. It was first discovered in 1961 in Germany.

You are now approaching Kenidjack Cliff Castle, an Iron Age fortification. When you reach a fork in the path keep to the right.

Just to the right of the coast path are the remains of a Cairn Circle. The kerb is the part of the retaining wall of the mound and there is a cyst within the circle.

The Cliff Castle (Promontory Fort) and remains of the settlement are to your right. Remains of the banks and ditches which comprised the fortification can still be seen.

There is another sawn or chasm here known as South Zawn.

The remains of the building on Kenidjack Cliff Castle are from Wheal Castle, a mine which produced tin and copper in the 1800s.

There are a number of man-made caves in the cliffs at Kenidjack Head, mine adits which have been enlarged by erosion.

There is another sawn here - Zawn Buzz and Gen, meaning gully of food and song.

Follow the coast path over a stile and start your descent into the Kenidajack Valley, otherwise known as the Nancherrow Valley.

The first stage of your descent brings you to a wide track. Along the track to the right are some great views over the coastline.

Instead, turn left, following the track a short distance before turning right onto a narrow path which descends into the valley of the Tregeseal River.

To your right are stunning views of Cape Cornwall and the beach at Porthledden Cove.

The whole of the area in front of you is the Kenidjack Valley with its fascinating industrial archaeological interest. During the 1800s this valley was a hive of activity with up to fifty waterwheels along the Tregeseal River, reservoirs and leat systems, crushing mills and the Kenidjack Arsenic Works. Wheal Call (Boswedden Mine) had a 65 feet (19.8 metres) diameter waterwheel, the second largest in Britain.

You can see clearly the wheel-pits where the waterwheels once stood.

When you reach the valley bottom turn right to follow the coast path or make a brief detour to the left to visit Porthledden Beach.

When the path forks, keep to the right and ignore the public footpath going inland. Follow the coast path down onto the Cape Cornwall road. There are only two capes in the UK, the other is in Scotland.

At the car park there are toilet facilities.

The striking chimney on Cape Cornwall is part of the old Cape Cornwall Mine. There are also the the remains of St Helen's Oratory to explore and on the seaward side of the Cape is a National Coastwatch Institution Lookout Station.

The small beach at the foot of Cape Cornwall is Priest's Cove and this is where we end this stage of the Cornwall Coast Path.

If you wish to continue the next stage of the coast walk it will take you to Sennen Cove but if you want to rest at Cape Cornwall for a while or why not visit St Just which is around 1.4 miles away. By foot this will take about 30 minutes. There is accommodation and a large range of shops in the town.


Do you have information of a historic or community interest about Botallack to Cape Cornwall - Walk - Cornwall Coast Path which you would like featured on this page please email us with your information. 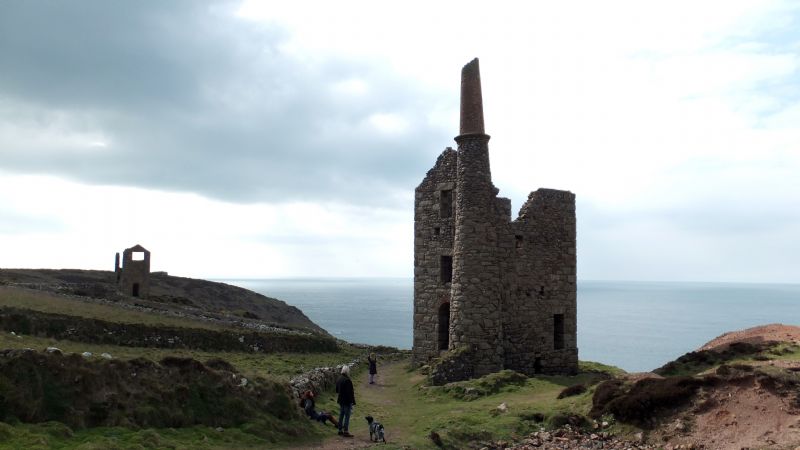