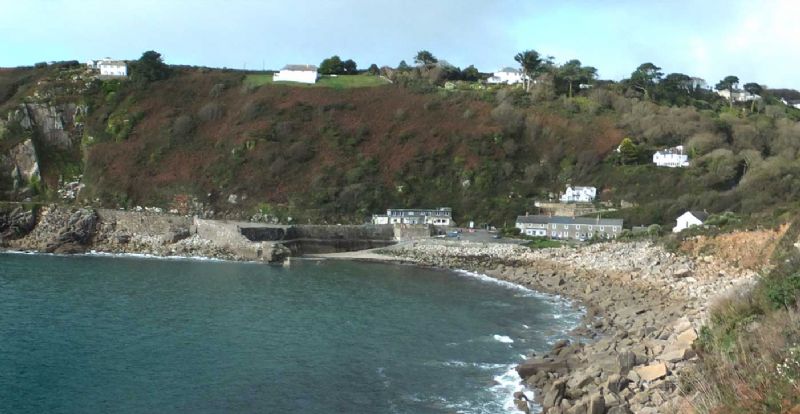 This section of the coast path has one steep section as you approach Penzer Point. The walk takes you from the famous Lamorna Cove, an inspiration for artists, through a Nature Reserve and woodland, to the picturesque, fishing village of Mousehole.

Park at the Pay and Display Car Park at Lamorna Cove.

There is a waymark sign for the coast path.

1. Walk past the cottages, cross the footbridge and take the path for Mousehole.

The path ascends gently as you pass Half Tide Rock giving you magnificent views of Lamorna Cove and its quay.

The path can be a bit uneven with granite blocks to scramble over. This first section of the path is quite narrow and very close to the cliff edge. The old quarries and tips are above you. Granite from these quarries was used in the construction of the Wolf Rock and Bishop Rock lighthouses. This side of the valley was owned by Lord St Levan.

2. The path levels out for a while before a series of stone steps take you up onto Carn Du.

There are great views from here including Tater Du Lighthouse.

The rocks below Carn Du are popular with fishermen. Mackerel, garfish, pollack, scad, wrasse and conger eels can be caught from here.

3. The coast path drops down a little from Carn Du and then remains fairly level for the walk towards Kemyel Point.

Don't forget to look back for lovely views of Carn Du. Kemyel Cliff is above you.

4. Looking forwards again you see a stand of trees.

The area is the Kemyel Crease Nature Reserve. Just before you enter the reserve, a small path on your right leads from the coast path into a small, rocky cove.

As you enter the nature reserve there is a small sign informing you that the site belongs to the Cornwall Wildlife Trust. You are now walking under trees and shrubs with occasional views through them to the sea below. Zawn Organ, a chasm in the cliffs lies below.

5. The path ascends slowly through the trees.

Kemyel Rock is offshore. There is an information board on the other side of the reserve.

6. A short distance, after you leave the reserve the path turns to the right and goes down a few stone steps.

Look back to see the Monterey Pines just above the coast. You soon encounter a number of rock steps with a small stream from a spring, flowing down through them. This area is named Slinke Dean. Walk up over the stones.

7. The path starts to climb, first gently and then steeply.

The path becomes very steep as you climb a series of steps. It is worth the climb for the panoramic view of Mount's Bay from Penzer Point. Two benches await you if you need a rest after the climb.

Penzer Point has a disused coastguard lookout. You can see why it was located here as the view is excellent.

A path waymarked for the inland route to Lamorna is on your left. If you want to make this a circular walk you can return to Lamorna across the fields from this point. (More information later).

9. Staying on the coast path to Mousehole you will soon pass more houses and join the road on Raginnis Hill.

Point Spaniard is on your right. This is believed to be the location where the Spanish landed in 1595 when they sacked Mousehole, Paul, Newlyn and Penzance.

Looking offshore you can see Merlyn Rock at the southern end of the quay.
The rock is named after the wizard, Merlin, who is believed to have made a prophecy here, "There shall land on the Rock of Merlin, Those who shall burn Paul, Penzance and Newlyn" The Spanish did invade and caused considerable damage.

At the foot of the cliffs below you is The Mousehole, the cave after which the village is named. The cave could have been used by smugglers and there are suggestions that it was a rock shelter.

The large island off Mousehole is St Clement's Isle. The stone structure on the isle is known as the Pepperpot was erected in 1830 and is inscribed '1830 J A Halse Lord of This Manor'. On the landward side of the isle is Shag Rock.

Take time to enjoy Mousehole and explore its tiny streets and harbour.

Bus service No. 347 from Penzance to Lamorna
Service operated by WCT

Bus services A1 from Penzance to road to Lamorna
Services operated by First Kernow.


Do you have information of a historic or community interest about Lamorna to Mousehole - Walk - Cornwall Coast Path which you would like featured on this page please email us with your information.

Businesses
in or around Lamorna to Mousehole
Walk
Cornwall Coast Path