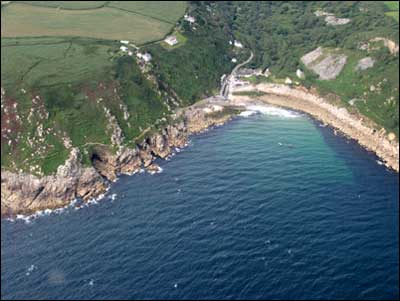 Lamorna Cove from the Air

Lamorna Cove and the valley which lead to it are the subject of a Cornish folk song called 'Lamorna'. Many visitors have been captivated by this beautiful place and have gone 'away down to Lamorna'.

One of these visitors was the artist Samuel John Birch R.A., who, in the late 19th century, formed such an attachment to Lamorna , that he added it to his name and became notable for his works under the title 'Lamorna Birch'. Birch settled in Cornwall in 1902 and many of his best works are associated with this area. Stanhope Forbes, of the well known Newlyn School of Art, suggested the nickname for Birch to distinguish him from another artist who was working in the area, Lionel Birch.

Lamorna Woods run the length of the valley all the way to Lamorna Cove. During late spring they are filled with bluebells.

In the lush valley a tumbling stream makes its way to the sea through a dense tangle of twisted trees. Hidden away in the trees in the upper part of the valley are the picturesque remains of Lamorna Mill (also known as Kemyell or Bossava Mill). This water mill ceased to operate as such in 1919 but it still retains many of its orginal features and is of great interest. Already in operation by 1300, certain features of its design suggest a possible Norse origin.

There are the ruins of another water mill close to this one and Nanstewas Mill was also sited here but it has long since disappeared. Perhaps the stone was reclaimed and re-used by the Manor of Rosmodress, who were responsible for its construction in the mid 15th century.

The name, Lamorna, is believed to derive from the Cornish word Nansmornow, meaning the valley of 'Mornow'. Whether the name Mornow was the name of a landowner or the name of the stream is not known but the name appeared as early as the beginning of the 14th century.

Many thanks to Diane Penberthy for contributing the following information:

"My great great grandfather Abraham Roberts had 38 acres and employed 2 labourers in 1851 for his farm at 95 Kemyell Wells. He was also a carrier. He left all this in 1853 for Australia unassisted passage. He did very well for himself firstly as a blacksmith, and this then resulted into a very big engineering works called Roberts and Sons in Bendigo Victoria. He had married Elizabeth Tonkin and they had 10 children. His older brother Thomas had taken over his father's blacksmiths shop, hence the trip to Aus as he yearned to do that work apparently. He attended Paul Parish as did all his family. I can only go back to 1721. I believe Lamorna is the district. Sampson Hoskin was the miller at the mill in 1851."

Lamorna Cove is dog friendly with dogs allowed all year round.

There is an excellent range of accommodation available in the area.


Do you have information of a historic or community interest about Lamorna which you would like featured on this page please email us with your information.

Location:
Located on the South coast of Cornwall between Mousehole and Porthcurno.

Businesses
in or around Lamorna 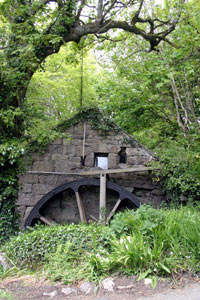 Properties in or around Lamorna available