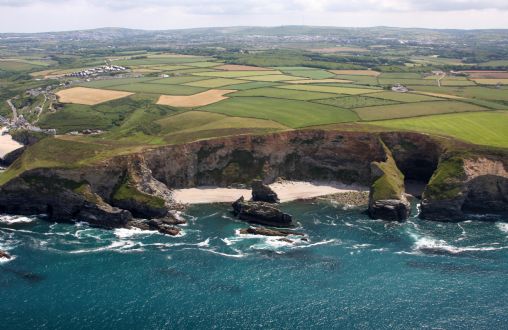 Smuggler's Cove, Western Cove and Ralph's Cupboard near the start of the walk

Dramatic cliff scenery with beautiful views of rocky coves and quiet sandy beaches.
In spring and summer colourful flowers surround the path including Yellow Rattle (Rhinanthus minor), Primroses (Primula vulgaris), Sheep's Bit Scabious (Jasione montana) and bright yellow vanilla scented Gorse (Ulex europaeus). This part of the Cornwall Coast Path, like many is in an Area of Outstanding Natural Beauty (AONB). There was a huge cliff fall in the area in 2011. This can be seen in the video below.

If you are using your own car please park on the main car park behind Portreath beach. Public transport details below.

Leave Portreath following the coast path uphill. There are a couple of steep climbs to start with and then the path becomes quite level providing easy walking conditions.

Walk up Western Hill (Tregea Hill). Don't forget to look back at the lovely view of Portreath beach. The large rock lying off Portreath Beach is Gull Rock. Smuggler's Cove and Western Cove lie below you.

After a short walk look down into Ralph's Cupboard, now a narrow inlet in the cliffs this collapsed sea cave was reputedly used by smugglers for hiding their loot. The folklore of the area suggests that Ralph's Cupboard was the home of a giant called 'Wrath'. This giant would throw rocks at passing ships then eat their crew and steal their cargo. The cave is now used by grey seals who can be seen hauled up on the rocks at the foot of the cliffs.

You are now crossing Carvannel Downs. Porthcadjack Cove lies below you. This rocky cove is flanked on one side by Samphire Island. Rock Samphire was harvested from rocks and eaten after being pickled. It usually grew in the most inaccessible of places and many people have met with an untimely end while gathering the delicacy. Difficult access with scree slope and the cliffs are prone to rock falls. There is a stream with a waterfall here so you can get quite wet after heavy rain.

The next cove you reach is named Mirrose Well Cove. This cove is only accessible from Porthcadjack Cove or Basset's Cove at low tide. It consists of shingle, rocks and a small amount of sand.

Mirrose Well is located just a little further along the path and is adjacent to the coast path near Basset's Cove car park.

Basset's Cove has a sandy beach at low tide and is difficult to access. Only attempt to descend to the beach if you are experienced in using very difficult steep paths. The cove is named after the Basset family who were landowners and owned many mines in the area during the 18th and 19th centuries . A monument to Francis Bassett , Lord de Dunstanville stands on Carn Brea, near Redruth. Basset's cove was formerly worked as a stone quarry. Horse-powered winding gear was used to haul the blocks to the cliff top.

The remains of an archaeological site from the Iron Age, Crane Cliff Castle stands on the clifftop,now mostly eroded away into the sea.

Greenbank Cove. The cliffs here are around 80m high. The secluded cove is accessible but the path is difficult and steep. Look out for the interesting contorted rock strata.

The area you are now crossing is called Reskajeage Downs. An area of flat plateau terminates in magnificent cliffs. The area is a former raised beach.

Deadman's Cove has 80m cliffs. It is possible to access the beach but it is difficult and steep.

This area is known as North Cliffs.

Derrick Cove is a narrow sandy inlet accessible from Deadman's Cove during low water but beware being cut off by the tide.

As you get closer to the end of your walk, you cross Hudder Down with the remains of a Bronze Age tumulus. Hudder Cove cliffs provide a sheer drop to the sea below.

On reaching Hell's Mouth and gazing over the sheer cliffs into the roaring sea below, you soon understand why the location has gained such a dramatic name.
Sea birds glide below you and rest on the cliff ledges. Don't step over the fence. It is there for your safety.

Bus service between Troon to Redruth via Camborne, Portreath and Illogan.
Service 43 operated by First


Do you have information of a historic or community interest about Portreath to Hell's Mouth, Cornwall Coast Path - Walks in Cornwall which you would like featured on this page please email us with your information.

Businesses
in or around Portreath to Hell's Mouth, Cornwall Coast Path
Walks in Cornwall