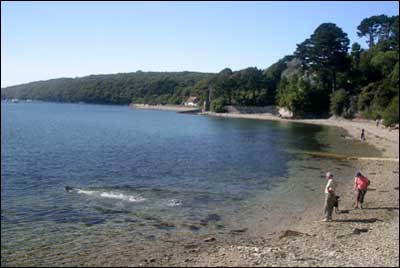 The River Helford or, as it is more popularly known, the Helford has its estuary on the eastern side of the Lizard Peninsula and just south of Falmouth.

The Helford River has a number of branching creeks one of which is particularly famous because of its association with Daphne Du Maurier, Frenchman's Creek.

The Helford rises in the parish of Gweek being fed by two streams, one from Merther-Uny towards Wendron parish and one from the Mellangoose area towards Helston.

From Gweek, the Helford River winds its way through tree-lined banks with its first creek, Ponsonfuel, branching to the south west. The river now passes Bishop's Quay, which stands at the head of Mawgan Creek, and then continues downstream passing Merthen Wood and Tremayne Quay. Merthen Wood was coppiced from as early as the 14th century.

The process of coppicing involves cutting trees on a rotational basis, leaving them, once cut, to sprout again with shoots from around their base and then returning to them a few years later when they have produced sufficient new growth to cut them again. The wood was burnt in kilns to produce charcoal for smelting tin and also for burning lime to produce fertilisers.

By Groyne Point, the Helford has widened considerably and another of its creeks can be seen, Polwheveral Creek with Polpenwith Creek stretching away from Scott's Quay. Polwheveral Creek extends towards Constantine

Having passed Groyne Point, the next creek which runs to the south is Frenchman's Creek.

Continuing seawards the Helford approaches the village of Helford and shortly before this Porthnavas Creek stretches away to the north from Pedn Billy, leading up to the picturesque village of Porth Navas and beyond.

Polgwidden Cove is then seen on the north bank of the Helford and just beyond it the lovely village of Durgan.

As the estuary of the Helford is reached, a rounded hill is seen on the mouth of the river on its northern side, behind which is the village of Mawnan and Mawnan Smith with its beautiful church. There is a fine walk from this headland to Mawnan giving you an amazing view of the Helford.

Marking the southern point of the Helford's estuary is Dennis Head.

The Helford is a haven for wildlife and has a rich variety of birds which live on and around the river including Curlews, Shags, Cormorants, Turnstones, Redshank, Dunlin, Grey Herons, Buzzards, Sparrowhawks and Oystercatchers. Many birds migrate here for the winter. Black Throated Divers, Red necked and Slavonian Grebes, Great Northern Divers, Little Egrets, Eider Ducks and the Common Scoter. There are a number of heronries around the Helford.

The Helford River and its estuary is home, some or all of the time, to a variety of fish with over 80 species recorded including a number of very rare ones: Anglerfish, Bass, Common Goby, the rare Couch's Goby, Cuckoo Wrasse, Dogfish, Dragonet, Five-bearded Rockling, Flounder, Herring, Mullet, Nursehound Shark, Plaice, Pollack, Red Mullet, Shore Goby, Spurdog Shark, Tadpole Fish, Tope Shark and Twaite Shad.

Oysters are notable in the Helford which has been an oyster fishery for many centuries. Native Oysters are farmed from and Pacific Oysters are imported and placed in cages in the river for fattening. The season for oysters runs from September until May so collecting Helford oysters starts in August. There are strict guidelines governing the size of oysters to be harvested and any small ones are put back in the river to continue growing.

A tradition of shellfish collecting still exists on the Helford, where cockles, limpets,mussels and winkles, have been collected for hundreds of years. The tradition of 'trigging' takes place every year on Good Friday, when a large group of people congregate and process to the beach to collect as many cockles as they can find.

During the second world war, the Helford River was used as an embarkation point for soldiers heading for the beaches of Normandy for the D-Day landings. The Naval Secret Service also operated from here using French fishing boats.


Do you have information of a historic or community interest about River Helford which you would like featured on this page please email us with your information. 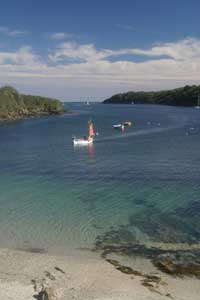 Businesses
in or around River Helford