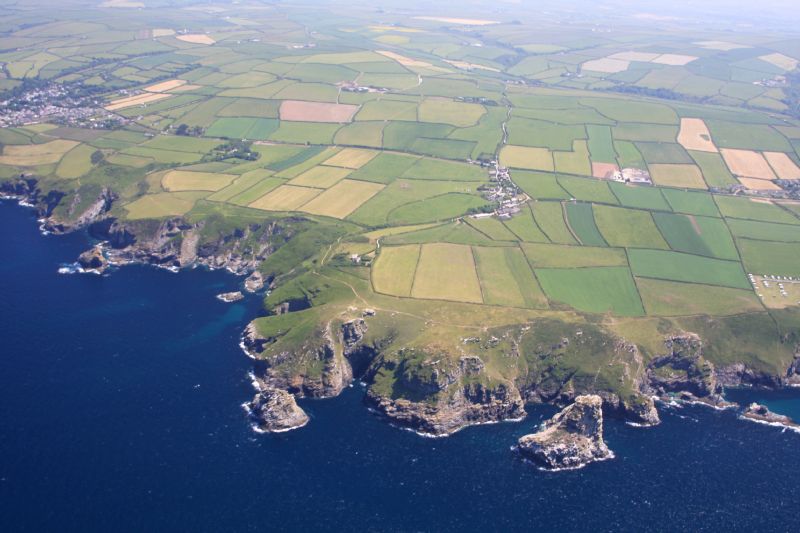 This section of the Cornwall coast path offers you spectacular cliff scenery, a magnificent valley, an elephant and a castle associated with King Arthur.

Much of this section of coastline is a Site of Special Scientific Interest due to its geological and geomorphological interest.

This group of houses was formerly a manganese mill. The ground manganese was exported for use in industries such as glass making.

2. When you reach a fork at the end of the lane go left onto the footpath.

The path passes behind two cottages.

From here you have amazing views over Boscastle harbour and across to Penally Point.
The rocky islet off the coast is known as The Meachard. It is home to large numbers of seabirds. If you are walking here during rough seas you may notice evidence of The Meachard’s blowhole as spray is thrown into the air. Below you in the harbour is a natural bathing pool.

4. Follow the path around the headland to the left.

You soon reach a deep slit in the headland known as Eastern Blackapit. The path passes very close to the steep drop.

Another path forks to the right, leaving the coast path for a short distance to visit Willapark, the 317 ft high headland and the white-washed folly, long used as a landmark for sailors entering Boscastle and now used as a National Coastwatch Institution lookout point. Old maps show the building as a ‘Pleasure House’, ‘observatory’ and a ‘prospect house’. For over 100 years it was used as a coastguard lookout. It was built in 1827 by Thomas Avery, a Boscastle businessman, who is believed to have used it as a summer holiday home. He is thought to have had an interest in wrecking, walking the cliffs in bad weather to spot shipwrecks so he could be the first to access their cargoes when they ran onto the beach. The men of the Revenue then used it before their service changed to become the Coastguard and now the volunteer service use it as an NCI station. Willapark provides a fantastic viewpoint.

An Iron Age Cliff Castle is located on Willapark dating from circa 200BC.

After exploring Willapark return to the coast path.

Just inland of the coast path are the Forrabury Stitches, the remains of ancient Celtic fields. This method of dividing the land into strips on which crops were rotated over a number of years was first used by Celtic farmers and continued for hundreds of years. Examples of stitches are still being farmed today.

After a very short distance you reach Western Blackapit.

This area is famous for shipwrecks. The Jessie Logan was driven onto the shore here during the winer of 1843.

5. Continue following the coast path. After a short distance you can see the remains of California Quarry.

This was one of many slate quarries on this section of the north coast which were worked from the 1300s until the Second World War. Remains of the stone foundations on which the wooden tower was sited can still be seen. The tower was used to drag the slate up from the cliff. Men would work on the cliff face attached by ropes, a very hazardous activity. Fossils are occasionally found among the waste slate.

6. Continue along the path and cross the stile. The remains of Welltown Quarry can be seen on the headland. The path descends into a valley with a stream. Cross the footbridge.

This area is known as Grower Gut. You can see the remains of more quarrying.

7. Follow the path across another footbridge. The coast path climbs up from the valley.

Offshore is Grower Rock, home of seabird colonies including puffins, guillemots and razorbills.

8. Continuing along the path be sure to look back along the coast towards Boscastle.

9. The path crosses a stream while another path leads inland to the tiny village of Trevalga.

If you wish to make a detour to visit the Parish Church retrace your steps to the coast path after your visit.

Just inland of the coast path is a building which is the former Manor House of Trevalga. The remains of a horse whim can be seen in the quarry workings here.

10. Continue along the coast path. You soon reach another waymark.

Take a short detour down the path to visit the Ladies Window, the result of local geology and many millions of years. Take care not to walk through this fascinating feature as there is a steep drop to the sea behind it.

Just below, tucked into a cleft in the headland is Foot Cove.

Looking seawards you will see Short Island which is home to many seabirds.

Between Short Island and the foot of the headland is an area known as Horsepool.

12. The coast path turns sharply to the left and you are now crossing Firebeacon Hill.

To your right is Darvis’s Point. Just beyond are a series of small rocks known as Saddle Rocks.

14. Continuing along Trevalga Cliff, Trambley Cove is below you near Saddle Rocks.

On the seaward side of the path is another deep cut into the cliff. This inlet is Trewethet Gut. To the left of the path are fields used for seasonal accommodation.

15. After a short distance you begin the steep and winding descent into Rocky Valley.

The view here is stunning as you look down into this steep valley and ponder the steep climb you are going to make to reach the other side.

16. After crossing the footbridge over the Trevillet River you can choose to make a small detour to explore the Rocky Valley and the mysterious Rocky Valley spiral carving. The age of the carving is unknown and there is some debate as to whether it is very ancient. It can be found near the ruins of Trewethett Mill.

17. After your exploration of the Rocky Valley retrace your steps along the stream towards the sea and follow the coast path up the slate steps. At the top of the ascent follow the path to the left.

18. Continue along the path. Below you is Benoath Cove, with a large, sandy beach at low tide. You can often see seals along this section of the coast. Just inland of the path is the settlement of Willapark.

The path soon arrives at a gully. Springs rise just inland of the path.

19. Go down the steps into the gully, where a footpath waymark offers you several alternatives.

You can choose to take a detour to walk up to the hamlet of Bossiney or you can walk down into Bossiney Haven with Elephant Rock. We chose to make the detour to Bossiney Haven. The beach is dog friendly all year round. At low water this lovely sandy beach extends around the headland and joins up with Benoath Cove.

After exploring the beach and enjoying the view of Elephant Rock retrace your steps back to the waymark and follow the path towards Tintagel. Climb up from the gully to a kissing gate and then keep on the path down several steps and across the footbridge.

20. The path now heads uphill onto another headland called Willapark then takes a sharp left. If you want to explore this impressive headland leave the coast path at this point.

There is a small, sandy beach below Willapark. To the right of the headland is Lye Rock. Many puffins used to live here but nowadays it is home to razorbills, guillemots and other seabirds. The Iota was wrecked here in 1893. The remains of an Iron Age Cliff Castle can be seen on Willapark. The name comes from the Cornish and means ‘enclosure with a view’. There may even be traces of hut circles on the headland.

Off Willapark are The Sisters, two islets containing many breeding seabirds. A reef joins The Sisters to the headland.

21. After spending time on Willapark return to the coast path and follow it to a kissing gate.

The area below the cliffs here is called Gullastem.

22. Continue and keep right to stay on the coast path.

A path heads inland to Bossiney. This track is known as Sanding Lane, a reminder of how it was used for hundreds of years for farmers to bring seaweed from the beach for fertilising their fields. The remains of ’stitches’ can be seen at Bossiney, dating from the same period as those at Forrabury.

23. You are now on Smith’s Cliff. The area of coast between Bossiney and Tintagel is notable for its geology. It contains many excellent exposures of contorted Devonian and Lower Carboniferous slates and volcanic rocks.

24. The path continues past Barras Gug. The headland on your right is Barras Nose. You may wish to make a short detour to explore this headland.

In 1897 Barras Nose was the first coastal property acquired by the National Trust. It was acquired to protect it from planned development of the Castle Hotel. Archaeological evidence suggests that this headland has been used by humans for at least 4000 years. A ridge lies across the landward side of Barras Nose which suggests it may have been used as a Cliff Castle during the Iron Age. Finds of flint tools have been collected from here which date from the Bronze Age. In the 1890s the headland was referred to as Barrows Cliff so it is possible that there were once burial mounds here.

The Castle Hotel was finally built a short distance inland from the headland. It was used as a location in the 1979 film ‘Dracula’ which starred Lawrence Olivier. Its architect was Silvanus Trevail.

25. Follow the waymarks in the direction of Glebe Cliff. Walk down a few steps to another waymark then follow the path towards Tintagel Castle.

Tintagel Haven is below you, a small rocky cove also known as Castle Beach. A waterfall cascades onto the beach. Merlin’s Cave can be found on the side of the cove. The cave is over yards (100 metres) long, piercing the entire headland from Tintagel Haven to West Cove. At low water you can walk the length of Merlin’s Cave but make sure you keep an eye on the tide. A carving of a sleeping Merlin can be seen beside the entrance to the cave. Tintagel Haven was a port for the shipment of locally quarried slate and the import of coal from Wales.

This section of the walk is now complete. You may wish to visit Tintagel Castle. The Island and Tintagel Head. English Heritage maintains this ancient monument. This whole area has been associated with King Arthur and the Knights of the Round Table.

If you wish to continue along the coast path follow the path upwards onto Glebe Cliff but if you prefer to break your journey you can now follow one of the paths inland to take you to the village of Tintagel with its shops, cafes, pubs and accommodation.

If you wish to travel to the start of the walk by bus there are buses to Boscastle from Wadebridge, Rock, Camelford, Bude. Please see timetable for full details.

If you wish to leave the coast path at this point there are buses from Tintagel.

Bus services 95 and 96 operates between Tintagel, Boscastle, Bude and Wadebridge Service provided by First Kernow. During the summer months the services are available 7 days per week.


Do you have information of a historic or community interest about Boscastle to Tintagel - Walk - Cornwall Coast Path which you would like featured on this page please email us with your information.

Businesses
in or around Boscastle to Tintagel
Walk
Cornwall Coast Path