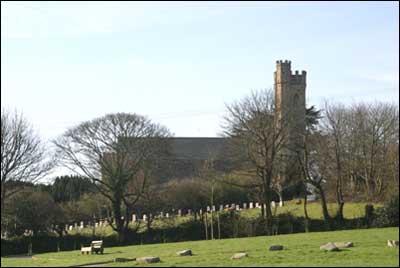 Chacewater, or Chasewater as it was formerly known, lies in the heart of what was one of Cornwall's most famous mining areas and much of its history and heritage is entangled with mining and other reminders of the areas industrial past.

The Chacewater tin and copper mine is noted by the authority on Cornish mining, J.H. Collins, in his 'Observations on the West of England Mining Region', as being a copper stockworks, the elvan being "full of small strings of copper ore". Wheal Busy (pronounced Bissy), on the outskirts of Chacewater village, is one of the oldest copper mines in Cornwall with its associated smelting house at North Downs, believed to date from the late 17th century. Wheal Busy attained a depth of 220 fathoms.

William Borlase, the famous Cornish historian reported in 1758 on the "Chacewater and North Downs mines as being among the most profitable Cornish mines in the period from 1718 to 1758. In this first working the clear profits of Wheal Busy are said to have been not less than £200,000".
Chacewater's mines are also famous for their association with James Watt, who erected one of his steam engines here in 1777.

The railway came to Chacewater between 1903 and 1905 with the building of the Great Western Railway's (GWR) branch line between Chacewater, Perranporth and Newquay. The line is now mostly disused.

The name, Chacewater, is believed to mean 'hunting place by the water/stream'.

For many years, the village of Chacewater used to hold an annual mock-mayor ceremony. This colourful custom unfortunately died out for a number of years.

However, at the Village Fete, held on Bank Holiday Monday in August 2011, we elected a new Mock Mayor ! The current incumbent is Paul Bearham, well known in the village as a parish councillor, secretary of Chacewater Bowling Club and leading member of Chacewater Players, the local amateur dramatic group. (Mock Mayor information contributed by Carol Heathcote)


Do you have information of a historic or community interest about Chacewater which you would like featured on this page please email us with your information.

Businesses
in or around Chacewater