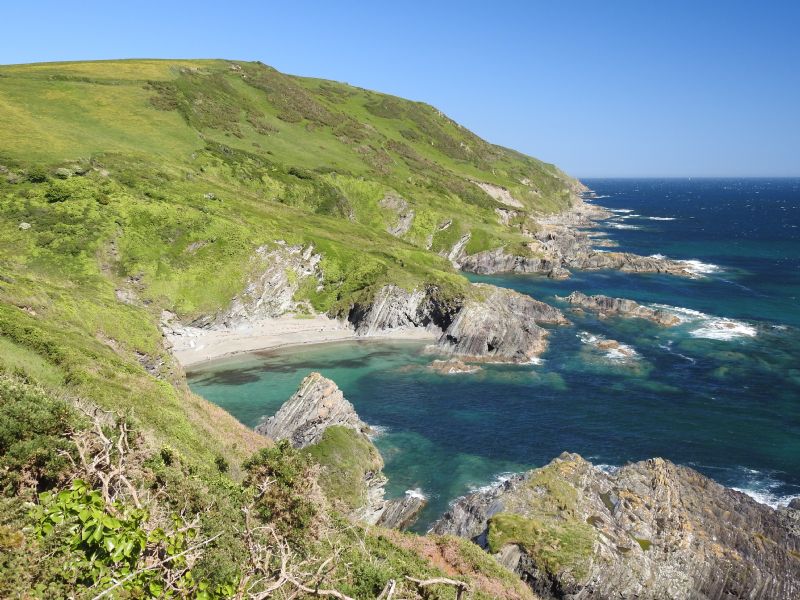 A characteristic of this section of the coast path is that it is something of a rollercoaster with a number of steep ascents and long descents, all adding to the spectacular views.

Smuggling would once have been a major industry along this stretch of coast. The whole of this section of coast is part of a Site of Special Scientific Interest (SSSI) and a Special Area of Conservation (SAC). At shore level, the rock formations and structures are especially interesting. The cliffs and grassy slopes are an important habitat for plants and animals, some of which are listed in the Red Data Book of Threatened Species.

Grey seals are often seen on this part of the coast. You may see them at low tide, hauled out on rocks.

1. This section of the coast path begins at Lansallos Cove (West Coombe Beach) in the parish of Lansallos, on the beautiful Lantivet Bay.

Lansallos in Cornish, Lannsalwys, is from the Cornish words, ‘lann’ meaning a sacred enclosure or church site and ’Salwys’ which is possibly the name of a Celtic Saint.

You may wish to explore the pretty sandy beach before beginning the walk. Reed Water stream flows through West Coombe and meets the sea here cascading onto the beach creating a small waterfall. The track onto the beach is cut through the rock and forms the end of Sand Lane. Farmers used to bring sand and seaweed from the beach, carrying it along Sand Lane to their fields. It is likely that smugglers would have used this track for transporting their contraband. The cutting on the beach shows the signs of cart wheels worn into the rock. This lane leads through West Coombe and can be used to visit Lansallos Church which is a short distance inland.


2. Cross the footbridge above the waterfall and follow the coast path. The path goes to the left and slightly inland before turning to the right and heading back to the coast. The path soon passes above Parson’s Cove.

Parson’s Cove is owned by the National Trust. It has a small sand and shingle beach with rocks protruding out into the sea. It is more sheltered than Lansallos Cove. At high water there is no beach. There is a narrow, steep path leading from the coast path if you wish to access this beach.


3. The path passes a series of three narrow rocky inlets. You are now on Lansallos Cliff (Grid Ref: SX 1721 5091). After a short distance the path descends into the East Coombe valley. Cross the footbridge over the stream here and then follow the path uphill.

As you approach East Coombe you will see a white daymark. This ft (5 metre) mark indicates the location of a shipping hazard. This was formerly a navigation aid for sailors, marking the submerged Udder Rock just offshore, but nowadays there is a buoy identifying the hazard.

Udder Rock lies half a mile offshore and is partially uncovered at low tide. It is a danger to shipping and sailors should give it a wide berth.


4. The path descends as you approach Broad Cove. Cross the footbridge.

Broad Cove has a rock and shingle beach.


5. A steep climb now awaits you. Just inland is the hamlet of Lizzen.


6. After a short distance of level walking you reach Blackybale Point.

There is a natural arch piercing the point.


7. After a short distance the coast path passes the highest point of this walk before descending gradually to the path above Colors Cove. Cross the footbridge above the cove.


8. Continue along the coast path. You soon reach Nealand Point.

At Nealand Point the rocks extend ft (200 metres) offshore. The Point is noted for its overhanging cliff. You are now one mile from Polperro. 300 metres off Nealand Point is Larrick Rock, a reef that is uncovered at low tide and hidden as the tide rises.


9. The path continues to provide a challenge as it rises and descends again.

You soon pass two rocky coves - Swallow Cove (Grid Ref: SX 2040 5054) and then Tea Cove. Snorkelling is very good between these coves and Peak Rock at Polperro. There are numerous rock pools along this area of the coast by the bathing pool. A short distance inland is the hill, Hard Head (Grid Ref: SX 2016 5073) and just off the beach are the rocks known as The Bridges.

The land at Raphael Cliff was donated to the National Trust - a small plaque commemorates this donation. Wildlife abounds during the spring and summer with many butterflies and wildflowers.

This is an ancient area of Polperro. Raphael appeared in the Domesday Book in 1086 as Raswale. Polperro consisted of two manors, the western one being Raswale (Raphael) and the eastern, Killigarth. Its name changed over hundreds of years becoming ‘Rathwell’, Resfrawel and ‘Rafael’.

In the 1400s the manor belonged to the Colshull family. The manor included the lands of the Landaviddy estate and Polperro harbour. In 1811 they were sold and Zephaniah Job, known as the smugglers’ banker, bought the rights to the harbour.

At the bottom of Landaviddy Lane there was formerly a holy well which is said to have had restorative properties. It is believed to have been dedicated to St Peter, as was the chapel which existed in the field nearby.

In the 19th century, when the foundations were being laid for a house in the Landaviddy Lane area, a bronze coin was found. The coin came from the period of Licinius I, who was Emperor of Rome from AD 308 – 324.

Chapel Cliff is owned by the National Trust. Just inland is Chapel Hill (pronounced Chaypell). This area is named after the former Chapel of St Peter which stood here on the cliff at Porthpyre (Polperro). Its dedication to St Peter is likely due to him being the patron saint of fishermen. It is believed it may also have functioned as a lighthouse to warn sailors and fishermen of the dangerous rocks below and to indicate the proximity of the harbour entrance.

The building was first mentioned in records in 1392. By the early 1800s it was being used as a fish cellar and by 1882 it had been reduced to mere rubble, the only sign of its existence being a few stones.

Beside the coast path on Chapel Cliff you can see the remains of small agricultural plots (allotments) where villagers used to grow vegetables.

There are three shelters on this section of the path so there’s somewhere to shelter if you get caught out by bad weather.

On the headland below you is a net loft. The only access to the net loft is via a narrow footpath. The loft is owned by the National Trust and rented out to local fishermen. During its restoration in the early 1980s the three floor beams needed each weighed more than 1.5 tons. The Douglas Fir beams were so large that they had to be transported across the harbour on a custom built 16-foot barge. In severe southerly gales waves have topped this building.


Do you have information of a historic or community interest about Lantivet Bay to Polperro - Walk - Cornwall Coast Path which you would like featured on this page please email us with your information. 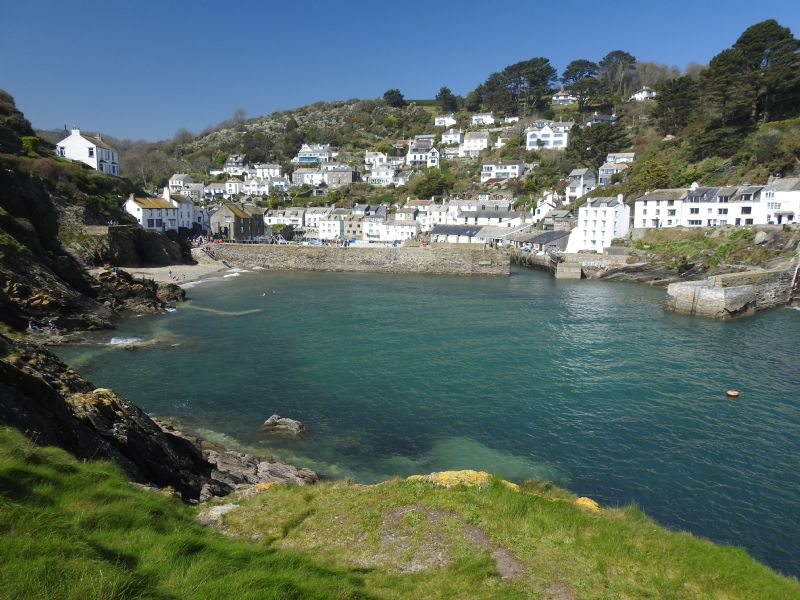