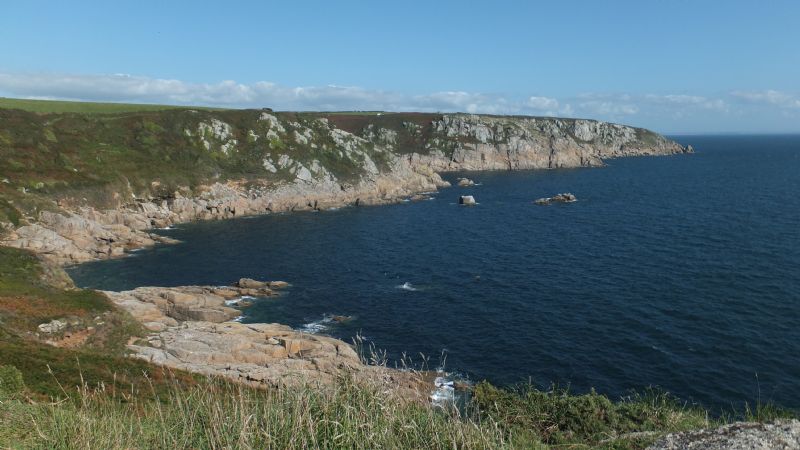 This section of the coast path takes from Penberth Cove, a delightful fishing cove managed by the NT and used as a filming location for the latest adaptation of Poldark, past rocky coves and isolated beaches, through stunning scenery to the famous Lamorna Cove, immortalised in song and in the many works of art created there. The path is fairly demanding in places and scrambles across rocks at St Loy's Cove.

Parking at Penberth Cove is very limited so it is best to park at Treen where there is a large car park. Follow the public footpath down through the fields into the Penberth Valley to the start of the walk.

Spend some time exploring the cove, with its picture postcard thatched cottages.

1. Cross the Penberth River and follow the path on the left as it starts to climb the cliff near Cliff Cottage.

2. After a short and steep climb follow the path around to the left onto Burnewhall Cliff.

Take time to look back at the excellent view of Penberth Cove. When we visited Poldark series two was being filmed so the path was being closed temporarily during filming scenes. The area of sea at the foot of Burnewhall Cliff and into Le Scathe Cove is excellent for snorkelling and diving. The estate map of Burnewall dating from 1778 shows the rock off the cove as ‘Lech Skath’ (Legh Scath) meaning ‘boat ledge’.

3. As you continue along the coast path ignore the left turn from the path which takes you back into the village.

4. At the next junction in the path take a right turn to stay on the coast path.

After passing above Le Scathe Cove the path continues onto a small point passing near
Penguarnon Rock. Offshore are the rocks known as the Gazells. It is possible that ‘gasel’ means ‘armpit’ and in fact refers to the name of the cove.

Another rock offshore is named The Pulpit.

5. Follow the path down some steps. Cross the stream. The path now ascends steeply.

You are now above Porthguarnon, a small rocky cove tucked between granite cliffs. It is possible to access the beach with care. The cliffs here are popular with rock climbers. You can swim here but there is no lifeguard cover and no rescue equipment. Dogs are welcome on the beach all year round.

6. Continue along the path and ignore the left turn going inland a short distance from Porthguarnon.

You are now entering Trevedran Cliff. Offshore are the Punions and Coffin Rock.

7. Continue along the path.

You soon arrive at Merthern Point, an excellent viewpoint for looking back along the coast to Treryn Dinas. Merthern is from the Cornish word ‘Merdhin’ meaning ‘sea fort’. a very apt name given its position. Offshore from the point is Merthern Rock

8. Continue to follow the path. After a short distance the path begins to slowly descend towards St Loy’s Cove with a sharp right turn passing St Dellan on your left side.

Soon you will see gardens on the seaward side of the path and you pass on your left what looks to be the remains of a well.

Inland is a lovely wooded area which extends to the road. It is a beautiful walk and particularly special when the bluebells are flowering in May.

9. When you reach a fork in the path ignore the path that heads straight on and take the right path which heads downhill through woodland between houses.

10. You cross a stream which tumbles onto the beac then take a left turn to walk along the back of the beach at St Loy’s Cove.

The cove has seen several shipwrecks. The Abertay, a French steamer ran aground here during thick fog in October 1912. The crew scrambled onto the wreck of the SS America which had been wrecked here seven months before. The following day the crew of the Abertay were able to climb to safety.

The path has been partially covered by boulders due to severe storms in the last few years. The beach consists of many large, rounded boulders. It lies within the Boscawen Site of Special Scientific Interest (SSSI) and "is a nationally important site for Quaternary geomorphology and Quaternary stratigraphy. Coastal exposures at the site show a sequence of granitic shore platform overlain in turn by raised beach deposits and head deposits". Dogs are welcome on the beach all year round.

11. After scrambling across the back of the beach for a while, the coast path once more resumes leading into woodland.

12. You start to ascend onto Boskenna Cliff.

Paynter’s Cove, an extension of St Loy’s Cove is below you. The cove is named after the Paynter family, who owned the farmhouse, Boskenna, for many generations. It was sold in 1957 and now provides luxury holiday accommodation. Mary Wesley, the writer of ‘The Camomile Lawn' lived here for several years and set many of her novels in this area.

13. Follow the path onto Boscawen Cliff. At Boscawen Point the path takes a sharp left turn.

The Juan Ferrer, a Spanish coaster was wrecked on Boscawen Point on the the 23rd of October 1963 with the loss of 11 lives after the vessel capsized.

14. Continue along the path. Soon the path passes above Chough Zawn.

Zawn comes from the Cornish word ‘sawan’ meaning a chasm. The chough is the national bird of Cornwall.

15. To the left of the path are Tregiffian Cottages. As you walk past their gardens Zawn Gamper is below you on the seaward side of the path.

The zawn is of interest to geologists.

Just ahead and below you is Tater Du Lighthouse, the most recently built lighthouse in Cornwall. It was built in response to the shipwrecks at St Loy’s Cove. The lighthouse looks out over the rocks known as the Inner and Outer Bucks, popular with divers. These two rocks are partially visible at low water. The SS Garonne was wrecked here in 1868. The area around Tater Du lighthouse is designated as a Site of Special Scientific Interest due to geological importance. The cliffs are also a Geological Conservation Review site.

17. Continue along the coast path passing several small fields on your left. The path takes a sharp turn to the left and approaches Rosemodress Cliff. The inlet of Tol Toft is below you.

18. You soon pass the entrance to the Derek and Jeannie Tangye Nature Reserve.

19. The coast path is now very near to the cliff edge. Ignore the paths that lead off inland and stay on the coast path.

20. The path now leads up to Carn Barges

Carn Barges means the Buzzard’s Carn, from the Cornish word ‘bargos’ meaning buzzard. Enjoy the wonderful views of the coastline.

21. After a shorty distance the path reaches Lamorna Point.

The point marks the western side of Lamorna Cove. Enjoy the spectacular views.

The path passes by Carn Mellyn

Carn Mellyn is an impressive outcrop of rock. The name is likely to be from the Cornish word ‘melyn’ meaning ‘yellow’ and ‘carn’ meaning a ‘heap of rocks’. The word ‘melin’ in Cornish means a mill but it is unlikely that it refers to a watermill in this location. There are the remains of water mills in the Lamorna Valley.

Below Carn Mellyn is a Celtic styled Cross - a memorial to a student who fell from these cliffs in 1873.

22. You are now walking along Tregurnow Cliff.

23. The path descends toward Lamorna Cove, emerging above the quay.

The quay has been heavily damaged by storms in recent years but the cove continues to be a lovely place to visit.

If you are walking during the holiday season, you can enjoy the end of your walk with refreshments at the cafe at Lamorna Cove which provides a wide range of refreshments.

If you are leaving the coast path here you can walk up the valley along the lane to pick up buses 1 and 1A which run between Penzance and Land’s End.

If you wish to travel to the start of the walk by bus there are buses to the entrance to Penberth from Penzance, St Buryan and Land's End. Please see timetable for full details.

If you wish to leave the coast path at the end of the walk there are buses from the top of the Lamorna Valley - Services 1 and 1A.


Do you have information of a historic or community interest about Penberth to Lamorna - Walk - Cornwall Coast Path which you would like featured on this page please email us with your information. 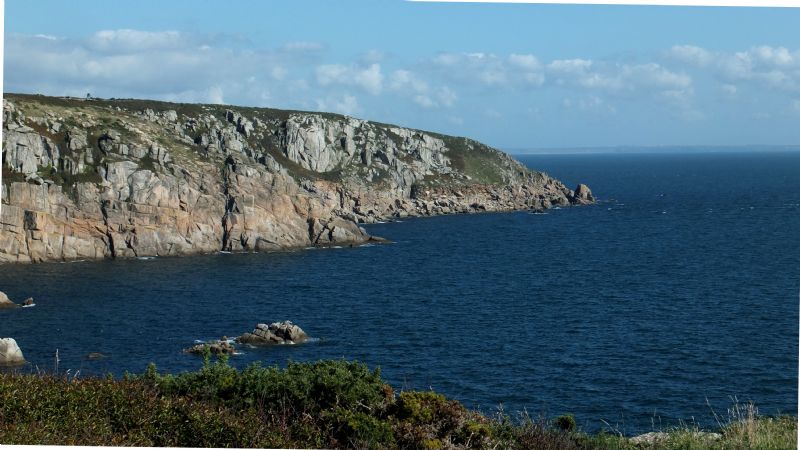 Businesses
in or around Penberth to Lamorna
Walk
Cornwall Coast Path