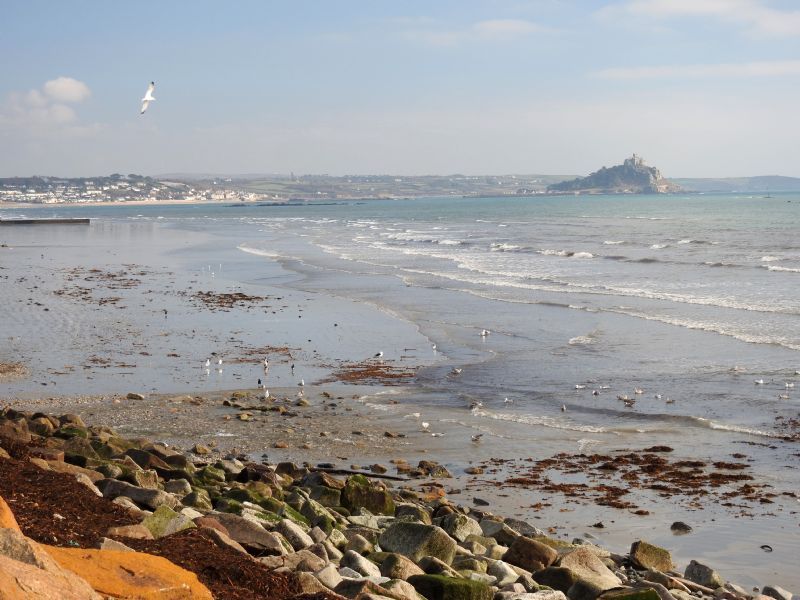 This section of the coast path takes you from the historic town of Penzance, home of the inventor, Sir Humphry Davy and of the popular annual festival of Golowan, past the terminus of the former Great Western Railway, along the shore of Mount's Bay with stunning views of St Michael's Mount to Marazion, an ancient town and gateway to the Mount.

The path is virtually level along its length and is suitable for buggies and wheelchair users.

1. This walk begins near the Albert Pier at Penzance.

This listed structure was formerly called Harbour Pier (1845). In 1846 Prince Albert landed here during a visit to Cornwall and the pier was renamed to mark his visit. The pier was extended in 1853.

2. Walk to the back of the bus station to pick up the coast path. (Ignore the seaward path along the sea wall as it leads to a dead end unless the tide is low when it is possible to walk down steps onto the beach) The coast path runs alongside the railway line. You will be sharing the path with cyclists so take care.

Opposite you is Penzance Railway Station. The station was opened in 1852 and was part of the West Cornwall Railway. Later, it became part of the Great Western Railway. A freight yard stood where the bus station car park now stands.

Below you is Chyandour Beach, this is probably from the Cornish words, 'chy' - a house/dwelling, 'an dour' - the water.

3. Continue along the path which crosses above a small stream which rushes onto the beach.

4. After walking for a short distance with a wall on your seaward side, the path climbs and you now have an undisturbed view across Mount's Bay to St Michael's Mount and beyond.

If the tide is low you now have a clear view of the beach stretching around the bay to Marazion. Chyandour gives way to Eastern Green Beach. Both are dog friendly all year round. A wooden footbridge crosses the rail line.

Looking inland, where the Sainsburys now stands was formerly the heliport from which British International flew to the Isles of Scilly. It is hoped that in the future a new heliport will be built nearby.

5. Continue along the coast path.

Looking seawards you may notice a small island. This rock is called Western Cressar (Grid Ref: SW 4870 3054). Slightly further eastwards are the Cressars (Cornish for 'midway'), another group of rocks (Grid Ref: SW 4898 3064). In 1850 beacons were erected on the Cressars and Ryeman Rocks. A disused pipeline crosses the beach.

6. A little further on and you reach Long Rock Beach. There is a car park above the beach through which the coast path passes.

Long Rock beach is dog friendly all year round from the car park towards Penzance. The beach is popular for windsurfing. The town and beach gets its name from a large rocky area just offshore. Another named rock is known as the Ryeman (Grid Ref: SW 4956 3046). A small stream flows onto the beach.

7. The path curves towards Marazion.

You pass the Station Inn, formerly Marazion Railway Station. A short distance inland is the RSPB Nature Reserve of Marazion Marsh. You may wish to make a short detour to visit (free admission).

8. The path crosses a foot bridge over the Red River and you enter a car park.

Offshore are two more rocks. Little Hogus (Grid Ref: SW 5114 3067) and Great Hogus (Grid Ref: SW 5137 3046). Hogus could possibly be from the Cornish words meaning 'high wood'. This name may at first seem out of place but there is a submerged forest in this part of Mounts Bay and at certain states of the tide it is possible to view the stumps of ancient trees which grew here four or five thousand years ago. The Cornish name for St Michael's Mount is 'Karrek Loos yn Koos', meaning 'grey rock in the woodland'.

9. Walk along the path above the beach into Marazion or take a walk on the beach if the tide permits.

If the tide is low you will be able to view the cobbled causeway which leads to St Michael's Mount. Marazion beach is large and sandy. Dogs are allowed on the beach from 1st October to 30th April at any time but during other times only before 8am or after 7pm.

The outcrop of rock on the beach near the Causeway is known as Chapel Rock.

Chapel Rock is believed to mark the site of a shrine dedicated to the Virgin Mary. Pilgrims travelling to the mount would stop to worship before crossing to the mount. A folk tale is associated with this rock. A giant called Cormoran is said to have lived on the Mount and he would carry blocks of white granite to the island. His wife, Cormelian, would sometimes help and on one occasion was carrying a piece of greenstone. When he noticed, he scolded her and the greenstone dropped from her apron onto the sand where it now stands. In another version of the story Cormelian was accidentally killed by the Trencrom giant when he threw his friend, Cormoran, a huge hammer. Cormelian was buried at Chapel Rock.

At lower tides, the summer ferry from Marazion to the Mount leaves from Chapel Rock.

10. Follow the path into the town of Marazion. This ancient chartered town was granted its first charter of incorporation by Henry III in 1257. There are pubs, cafes, restaurants, galleries and other facilities. Marazion Museum is open on weekdays throughout the summer.


Do you have information of a historic or community interest about Penzance to Marazion - Walk - Cornwall Coast Path which you would like featured on this page please email us with your information.

Businesses
in or around Penzance to Marazion
Walk
Cornwall Coast Path