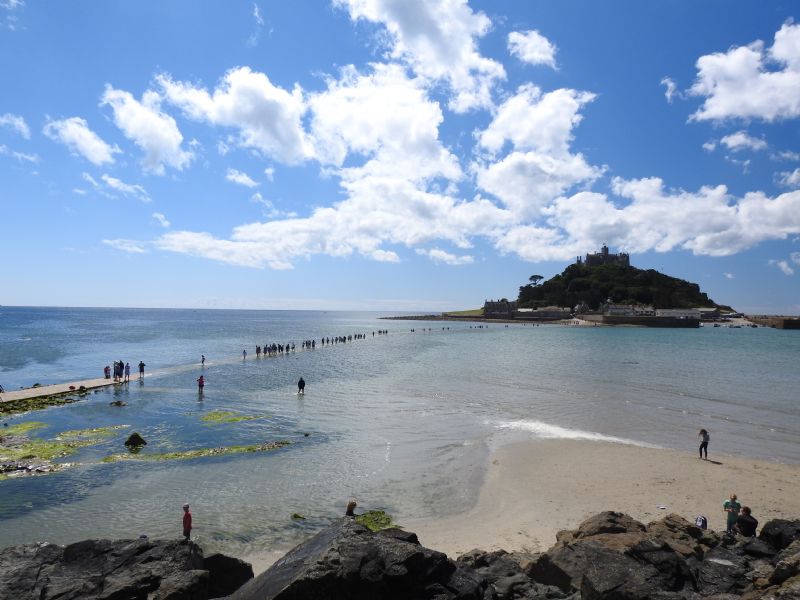 St Michael's Mount across the Cauaeway from Marazion

St Michael's Mount, in Cornish, Karrek Loos yn Koos, is a magical sight with its castle standing atop this small tidal island in Mount's Bay, near Marazion.

The Mount is accessed from Marazion by a cobbled stone causeway from mid tide to low water.

Today, St Michael's Mount is managed by the National Trust.

The Mount has a long history having been occupied from at least the Neolithic (New Stone Age) period, some 5000-6000 years ago.

It is believed that between the 8th to the early part of the 11th century the Mount was the site of a monastery.

The Mount has been a place of pilgrimage for hundreds of years. In the 11th century, Pope Gregory granted the abbey an indulgence.

In the 11th century it was given to the Benedictine order of monks from the Norman abbey of Mont Saint-Michel by Edward the Confessor.

St Michael's Mount was the Cornish counterpart of Mont Saint-Michel in Normandy, France. Monastic buildings were constructed during the 12th century. In 1275 the original priory church was destroyed by an earthquake. St Michael's Mount remained a priory of Mont Saint Michel until the dissolution of alien houses during the reign of Henry V. The Mount was seized by the Crown in 1424. It was then given to the Brigittine Abbey of Syon

The priory church was rebuilt during the 1300s and is still used today.

Since around 1650, the castle has been the home of the St Aubyn family.

Today, the earliest buildings that have survived on the summit date from the 12th century.

Around 2010, sixty five years after the Second World War, information came to light from interviews with contemporaries of Joachim von Ribbentrop, the former Nazi foreign minister and ambassador to Britain, that he had wanted to live on the Mount if the German invasion of the UK was successful. Archived documents revealed that during his time in Britain in the 1930s, in which he had initially proposed an alliance with Nazi Germany, Ribbentrop frequently visited Cornwall.

Its Cornish name translates as "the hoar or grey rock in the wood" and suggests a memory of the time before Mount's Bay was flooded by a great inundation, when the Mount stood in woodland.

The famous chronicler, John of Worcester stated that in early 1099 St Michael's Mount was situated 5 or 6 miles (10 km) from the sea, surrounded by dense woodland, but that on November 3rd, the sea flooded over the land and destroyed numerous towns, drowned many people and livestock.

The Anglo-Saxon Chronicle states on 11th November 1099, "The sea-flood sprung up to such a height, and did so much harm, as no man remembered that it ever did before".

This fits with the Cornish legend of Lyonesse. This ancient kingdom is said to have existed between Land's End and the Isles of Scilly, until a great inundation buried it beneath the waves.
It has been said that if you listen carefully on a calm day, you may hear the sound of its church bells, tolling beneath the sea.

Tree stumps are often seen at very low tides around Mounts Bay when storms remove the sand. Radiocarbon dating shows that the hazel woodland was submerged around 1700 BC but there are records of later floods.

The southern coast of the Mount is classified as a Site of Special Scientific Interest (SSSI) as a recognition of its geology.

It is particularly interesting that it is possible to view so many aspects of Cornwall's geology at a single location.

The Mount is the result of a granite intrusion into metamorphosed Devonian mudstones or pelites. The granite is mineralised with a sheeted greisen vein system.

Devonian Pelites are visible. These were mudstones when they were originally laid down but were metamorphosed and deformed to produce the folding you see today. The intrusion of the granite caused further metamorphosis and the creation of hornfels and mineralisation. The most developed mineralisation can be seen as sheeted greisen veins. These W-E veins are believed to have formed due to hydraulic fracturing when the pressure of the fluid reached a critical level at the top of the granite. The fractured granite was changed by the fluid, producing quartz and muscovite to replace the feldspars. These injections of fluid were responsible for the tin (cassiterite), tungsten (wolframite), tourmaline and boron found in the greisen veins.

During cooling, the veins became open to fluids from the surrounding country rock and these laid down sulphides such as chalcopyrite and stannite.

St Michael's Mount is steeped in folklore and legends.

It is believed that in prehistoric times, St Michael's Mount may have been a port, important for the trading of tin. It has been suggested that the Mount is the port, Ictis.

Joseph of Arimathea, who was responsible for the burial of Jesus, is believed to have visited the Mount to buy Cornish tin, bringing with him his teenage nephew Jesus.

In the 5th century AD, the Archangel, St Michael, is said to have appeared to local fishermen. This is reported to have taken place on a high rocky ledge on the western side of the Mount. For centuries the site was a destination for pilgrims, who would look out over the precipitous ledge.

The Mount is associated with the giant Cormoran, who is believed to have created the island and lived here. Cormoran would wade ashore to steal sheep and cows from local farmers for his dinner. Tired of this constant tyranny, a young man named Jack, rowed out to the island one evening, while Cormoran was sleeping and dug a deep pit on the northern slope of the Mount. At daybreak, Jack blew loudly on a horn which shook the giant from his slumber and as he came rushing down the Mount, blinded by the rising sun, he failed to see the pit and fell into it, dying in the process. The local farmers, grateful for the demise of Cormoran gave Jack the title of Jack the Giant Killer and his name lives on as does the rhyme recounting his adventure

"Here's the valiant Cornishman
Who slew the Giant Cormoran."

As you walk the main path from the harbour to the Castle, you will pass the shuttered well, where Cormoran fell.

The Mount also featured in the Celtic tale of Tristan and Isolde which may be historic in origin. Ogrin, the hermit was sent to St Michael's Mount by King Mark to buy clothes for Queen Isolde, of the finest wool and linen.


Do you have information of a historic or community interest about St Michael's Mount which you would like featured on this page please email us with your information. 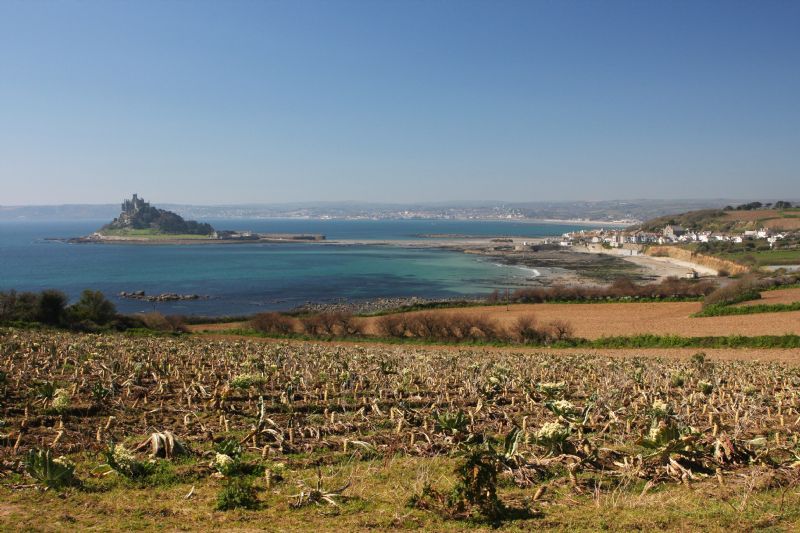 Businesses
in or around St Michael's Mount