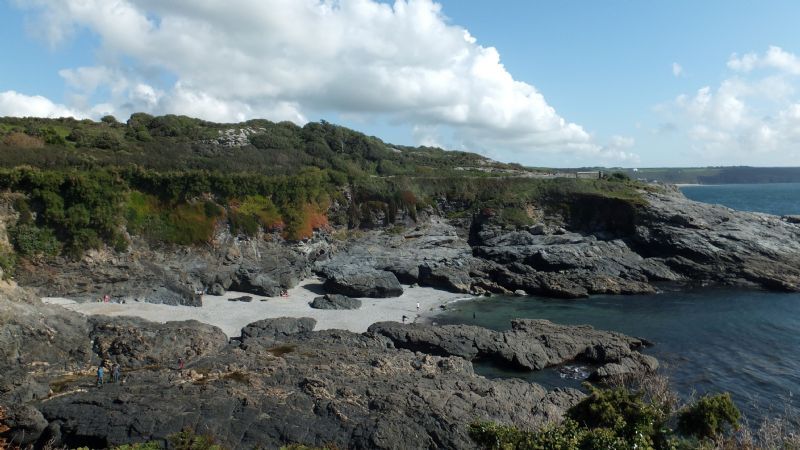 This section of the coast path takes you from a village recorded in the Domesday Book, past an old copper mine, near a beach famous for its seaweed to a magnificent headland and a cove with a history of smuggling.

1. Begin this walk at the end of the lane above the beach.

The beach is known as Perran Sands (not to be confused with the beach of the same name at Perranporth). Perranuthnoe, the parish in which you are standing was mentioned in the Domesday Book in 1086. It was known as Odenol. In 1235 its name had become Hutheno. By 1308 it was known as Udno and in 1839 it became Uthnoe-veor. There is still a farm in the village called Ednoe-vean.

2. Having admired the beach, walk up the road and turn right onto a lane just before the car park. Follow the path along the lane. When the lane forks take the right fork and after a few metres when the lane forks again take the right fork. The path takes you towards the cliff. When you near a house turn right and follow the path towards the cliff. The path forks again. If you wish to visit Trebarvah beach take the path to the right or to continue with the walk take the left path along the cliff top.

This is Trebarvah Cliff. The name Trebarvah comes from the name of the hamlet a short distance inland. It is from the Cornish words 'tre' meaning homestead or settlement and 'barvah' from berveth, meaning middle. The hamlet dates from at least 1342. You pass the remains of Trebarvah Mine, a former copper mine, also known as Wheal Castle, Wheal Jane and Mount's Bay Consols.

The path to the beach is the slipway where small fishing boats were hauled out after landing their catches. The beach consists of sand and shingle with rocky outcrops.

The area is of interest to geologists for its periglacial head deposits. Mount's Bay was dry land during the last Ice Age.

3. The coast path curves to the right as you pass above Trevean Cove.

If you wish to visit the beach you can access it down a path which starts just after the beach. Trevean is the name of the nearby hamlet a little distance inland. It comes from the Cornish words 'tre' meaning settlement or homestead and 'vean' meaning small.

5. The path continues over a couple of spring that drain into Long Zawn below you. A 'zawn' is a chasm in the cliff.

6. You are now walking on Stackhouse Cliff.

This is named after the Victorian botanist and builder of Acton Castle, John Stackhouse. He had Acton Castle built in 1775 and named it after his wife Lady Susannah Acton, a wealthy heiress from Shropshire.

7. Below you is Stackhouse Cove.

It was this sandy cove which attracted John Stackhouse. It is famous for containing the most diverse range of seaweed species ever recorded in Britain. Stackhouse studied the seaweeds and carried out experiments in the growing of them. His research was published in London in 1795 in 'A Botanical Description of the British Marine Plants in Latin and English, Accompanied with Drawings from Nature'. He believed that the seaweed and saltwater were beneficial to good health so he had a bath carved into the rocks in order for his wife to benefit from their healing properties. The cove is of interest to geologists for its tufa formation. This area of the coastline is popular for kayaking.

8. Continue along the path towards Cudden Point.

You soon pass above a small shingle beach. This is Porth Sampson. You can access the beach via a small path.

9. As you approach the neck of Cudden Point, Arch Zawn is below you, another narrow chasm in the cliff. The coast path cuts across the neck of the headland but you may wish to stop here a while to explore Cudden Point and take in the magnificent view. It's a great place to sit and enjoy a picnic.

On the western side of Cudden Point are Zawn Susan and Western Shag Rock.

Cudden Point (Grid Ref: SW 5494 2764) is managed by the National Trust. It was possibly an Iron Age Cliff Castle. It is part of the Cudden Point to Prussia Cove Site of Special Scientific Interest (SSSI) listed in the Geological Conservation Review. For any visiting geologists, "This is the best example in Cornwall of a mildly metamorphosed, differentiated tholeiitic intrusive greenstone that retains good relict igneous textures and mineralogy. It is characteristic of relatively large intrusive dolerite-gabbro sills in Cornwall and unique in that it is of tholeiitic composition and not alkaline. It is also internally differentiated and contains rare relicts of primary brown amphibole. The sheared and deformed marginal facies has a chemistry indicative of contact metamorphism by hidden, shallow granite extension from the nearby Godolphin diapir".

This headland has seen many shipwrecks. On 1st September 1883, the barque G.I. Jones was wrecked here in a SSW gale. Captain Norton and eleven men died. On 8th December 1911, the barque Saluto was blown off course and tried to anchor off the point. The Penzance lifeboat rescued the crew and the boat was dragged ashore at Perranuthnoe. In July 1956, the steam coaster, the Yewcroft, ran aground here.

Butterflies frequent this part of the coast during the summer months including grayling (Hipparchia semele), silver-studded blue (Plebejus argus) and small pearl-bordered fritillary (Boloria selene). There is a seal colony at Cudden Point.

On the eastern side of Cudden Point are Eastern Shag Rock and Zawn Harry.

10. As you prepare to continue the walk, make your way back to the coast path and look inland above Cudden Point.

You will see a small building. It was built during the First World War as a lookout point to observe the coast.

You now pass a small headland called Little Cudden. There appear to be the remains of an old chapel here. A plaque on the rocks states "We have a building of God, an house not made with hands, eternal in the heavens; where the spirit of the Lord is there is liberty".

12. Looking down, the beach below you is Piskies Cove.

13. Follow the path as it curves to the left.

The wooden post standing on its own on the cliff is a memorial to HMS Warspite, a Queen Elizabeth class battleship who served in both the First and Second World Wars. The post and chains here on this headland were used as a mooring point

In 1947, on her way to Faslane, where she was to be scrapped, she ran into a heavy storm. Breaking her tows, she ended up on Mount Mopus Ledge near Cudden Point. At high tide she re-floated herself and then ran aground in Prussia Cove. The crew of seven were rescued by the Penlee lifeboat. Several more attempts were made to re-float her but she was too damaged. She was finally dragged a short distance to St Michael's Mount where she was cut into pieces.

14. Continue along the path. Looking ahead, you will see the other three beaches which together are Prussia Cove.

You pass a small building on your left and just beyond it to the right is a path leading down to the west side of Bessy's Cove. The rocks on the side of the cove are a popular place for people to sit.

15. Stay on the coast path unless you wish to explore the rocks. After a short distance there is a fork in the path. If you wish to spend some time in Bessy's Cove take the path to the right and follow the steps down to the beach.

Bessy's Cove is named after the former kiddlywink keeper, Bessy Burrow, who kept a beer house here on the cliff above the cove.

This cove and the name of the general area of Prussia Cove were formerly known as Porth Legh (Slab Cove) but in the 18th century, the association of the area with the activities of the famous smuggler, John Carter, the notorious 'King of Prussia', earned it its current name.

The area off Prussia Cove is popular for diving with some great dives for intermediate novices. One large rocky island has a tunnel running through it. Conger eels, pollack and trigger fish can be seen.

16. If you've stayed on the coast path continue until you reach a turn to the right. You can walk down the covered pathway or down the track. Beware of vehicles on the track.

Don't forget to look to your right to enjoy more views of Bessy's Cove.

17. The path soon curves to the right but just before this look ahead to see The Enys, a rocky island and Battery Point just in front of it.

The Carters often clashed with the Revenue men and the brothers even had a number of cannon on the rocks above the cove which were often fired at the Revenue ships . Perhaps this ordnance gave Battery Point its name.

18. The coast path passes between the buildings of Porth-en-Alls House.

This listed building was built in 1911 in the Romantic Arts and Crafts style, designed by Philip Tilden. It stands in Porthlea an echo back to the original Cornish name of Prussia Cove. King's Cove stands directly in front of the building and is a private beach.

19. Continue downhill. You will soon catch a glimpse of Coule's Cove through the trees. Cross the ford. To your right is a path down onto the beach at Coule's Cove.

At low tide the beach has many rock pools. A stream flows onto the right side of the beach. Just above the beach are a row of seven cottages. They were built in 1826 by the Coastguard to help detect and deter smugglers. A lone house stands above them. This was built in 1885 for the former Archdeacon of Cornwall, du Boulay, when he retired.

You can choose to continue along the next section of the coast path or walk up the lane to the A394 Penzance to Helston road.

There are no buses from Prussia Cove. The nearest bus service, the runs along the top of the lane.


Do you have information of a historic or community interest about Perranuthnoe to Prussia Cove - Walk - Cornwall Coast Path which you would like featured on this page please email us with your information.