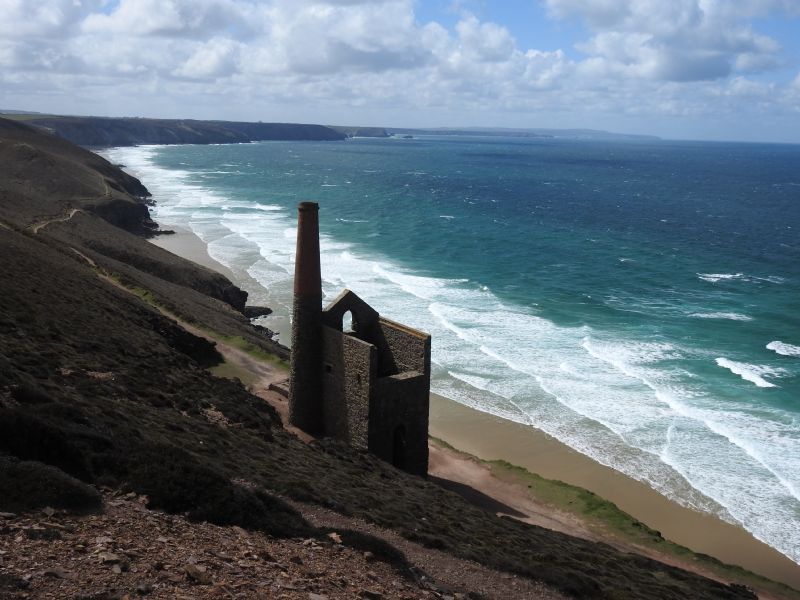 This section of the coast path takes you through some of the most stunning mining heritage in Cornwall from St Agnes with its beautiful beaches past St Agnes Head and the magnificent Wheal Coates to Chapel Porth with its legend of the Giant Bolster and onto Porthtowan, an excellent beach for surfing. The whole walk is within the St Agnes Heritage Coast area which stretches from Godrevy to just past St Agnes Head.

Car parks are shown on the map - near the beach and a short distance from the beach.

The main village of St Agnes, with its shops and post office is accessed via Quay Road.

1. The walk begins at Rocky Lane near its junction with Quay Road. Walk a very short distance up Rocky Lane from the road junction and take the coast path to your right.

2. The path starts to climb. After a short distance it joins a lane. Turn left onto the lane and walk past some houses on your left. Stay on the lane and walk between a few buildings either side of the track. You now have an excellent view of Trevaunance Cove, the main beach of St Agnes.

Trevaunance Cove is a Site of Special Scientific Interest and a Geological Conservation Review site.

This area would have been very busy with stables, horse whims, a coal yard and gantries for lowering and raising goods to and from the harbour. In 1839 one of the gantries was part of a public spectacle when an entertainer jumped from it to the harbour below in front of an audience of three thousand people.

When the tide is low you can see the blocks of granite below, abandoned when the harbour was washed away.

One of the houses here was the office for a shipping company while another contained a weighbridge. The Ship and Castle Inn used to stand here but its site has now been built over.

3. As you walk along the path on your right are various mining remains including ‘hutches’ - mineral ores were stored in these stone containers awaiting shipment for smelting.

This area is rich in mining heritage. The remains of former quarries and spoil heaps from mining are all around you.
To the west, close to the granite contact, tin was the major metal extracted, from the openwork of Wheal Luna to Seal Hole and Polberro closer to St Agnes Head.

Wheal Luna was located here overlooking Trevaunance Cove. This ancient mine working was an openwork where miners would chip away at outcrops of tin on the surface. Evidence of this open cast mining can be seen in the cliffs here. Wheal Luna was already operating in 1528 and is believed to have been working much earlier. It continued working into the nineteenth century.

4. The lane becomes a footpath and makes a sharp turn to the left. You pass through more disused quarries.

After a short distance you will see Polberro Cove below you. Enjoy the excellent view of the cove but don’t get too close to the edge.

Just inland from Polberro Cove is Polberro Mine. This mine was was of the richest and largest in Cornwall, producing an excellent quality of tin known as ‘diamond tin’. The shaft at Polberro extended 1,200 feet below the surface. The mine was in production from before 1511. It underwent several name changes over the centuries including Polberro Consols and St Agnes Consols.

You can still see the remains of the Turnavore pumping engine house (on private land) and part of the calciner.

5. Continue along the coast path passing more disused quarries on your left. You will soon see Bawden Manor Farm on your left and to your right is Newdowns Head. A variety of birds frequent this coastline including ravens along the cliffs and seabirds such as black-back gulls, fulmars, gannets, guillemots, kittiwakes, razorbills and shags over the sea.

Below Newdowns Head on the Trevaunance side is a huge cave known as ‘Seal Hole’. This cavern was used as Demelza’s cave in the ‘70s Poldark series.

A short distance inland is Seal Hole Mine, part of the Polberro mine group.

Off Newdowns Head are two rocky islets known variously as Bawden Rocks, Man and his Man and Cow and Calf. Today, they provide a popular breeding ground for seabirds but during World War II they were used as practice targets for aerial bombardment.

Just inland from Newdowns Head near West Polberro, mesolithic flint fragments have been found, dated to the period between 10,000 and 4,000 BC.

6. Proceeding along the coast path you pass the car parking area for St Agnes Head. On the day we walked here a large scale model aircraft was being flown on the headland.

This area is popular for picnics. St Agnes Head has been used as a location for the latest Poldark series starring Aidan Turner and Eleanor Tomlinson.

Tin was worked from an openwork at St Agnes Head from as early as the Middle Ages.

In more recent history this whole area was covered by a Royal Artillery Anti-Aircraft Practice Camp. During the Second World War, Cameron Camp, named after a local landowner, was located here with bungalows, Nissen huts, a NAAFI and a theatre. Cameron Camp was built between 1939 and 1940 on Napoleonic Wars target site. The camp was also known as the 10th Light Anti-Aircraft Practice Camp of the Royal Artillery. Between 1943-44 American army units were based here prior to their embarkation to France. Thousands of British, Canadian and American personnel trained here during World War Two

After the war the bungalows were used to accommodate local families until it was flattened in 1971. The sentry box remains and can be seen at the road entrance, marked with a plaque.

The next landmark you reach is the NCI Lookout Point. A lookout was first erected here in October 1926 to replace the old building on St Agnes Beacon. In 2009 a newer building was opened and handed over to the National Coastwatch Institute by the National Trust.

Lying off St Agnes Head are the rocks known as the Crams.

Carn Gowla is a favourite with rock climbers. It has nearly two hundred different climbs. The name is Cornish and means rock lookout.

7..When you reach a fork in the path, take the lower path. After a short distance you will see White Rocks - a rocky outcrop. A car park is closeby.

There is a disused mine shaft nearby. Just inland from here is a Site of Special Scientific Interest noted for its geological interest. Cameron Quarry SSSI is at SW 704507. This is the only site in Britain showing pervasive greisening of granite. The surface exposure can be seen in the northern part of the quarry.

The next landmark is Tubby’s Head. It lies below you, just above the sea. It is believed to be an Iron Age cliff castle. Its 20 metre bank is 2.3 metres wide and nearly 1 metre high with a 3 metre wide ditch and a causewayed entrance.

An alternative suggestion has also been put forward that it was a defended landing point as there is a large area of flat rock close to the sea which could have provided a landing place for boats.

Tubby’s Head is popular with fishermen as a wide variety of fish have been found here including bass, ray, smooth hounds, tope, bull huss, turbot and plaice. You should take care if you decide to climb down onto Tubby’s Head and never try to visit it or fish from it during a large swell as you are likely to be swept into the sea.

Spend some time enjoying the fantastic views of the Atlantic coastline and the wonderful mining heritage perched high above it and think about the people who used to work here during the 1800s.

9. The path continues towards Chapel Porth passing above two caves and a natural arch in the cliff. The first sea cave is just below Wheal Coates at the far end of Chapel Porth beach. If the tide is low you can choose to explore from the beach when you reach Chapel Porth. Take notice of the tide if you do decide to explore. The second cave is close to the natural rock arch.

Follow the path around the area famous for the folklore tale of Bolster the Giant and St Agnes. Just inland from the path is the Giant’s Footprint. The slit in the rocks can be seen where Bolster drained his blood trying to impress his beloved St Agnes.

Shortly before the path reaches the road at Chapel Porth, it passes the remains of the chapel which gives the porth its name. The medieval chapel was destroyed in 1700 The holy well survived until 1820.

10. When the coast path meets the road walk down towards the cove. If the tide is low you can walk out onto the beach which has a huge sandy expanse towards Wheal Coates and Porthtowan.

Natural rock arches can be seen on either side of the beach and there is another cave towards Porthtowan.

11. After enjoying the beach return to the car park in Chapel Coombe. Follow the path into the valley and follow it for a while before being directed to the right and up the hill to rejoin the coast.

12. When the path reaches the top of the headland known as Mulgram Hill, follow it to the left and you will pass through another area of disused mines. The engine house is part of Wheal Charlotte, a former copper mine.

13. The path then passes through Wheal Charlotte Moor and begins to ascend to Porthtowan.
Just before Porthtowan there is a small swimming pool below the cliff but this is best explored from the beach.

The coast path takes you into Porthtowan, where you enjoy a break and refreshments from a variety of cafes, bars and pubs, depending on the time of year.

If you wish to leave the coast path at this point there are buses from Porthtowan, stopping at Mount Hawke, Blackwater and Truro, with another route calling at St Agnes and Redruth, run by Hopley. Between the end of May and mid September, First Great Western operate a service between Newquay and St Ives which calls at Porthtowan.


Do you have information of a historic or community interest about St Agnes to Porthtowan - Walk - Cornwall Coast Path which you would like featured on this page please email us with your information.