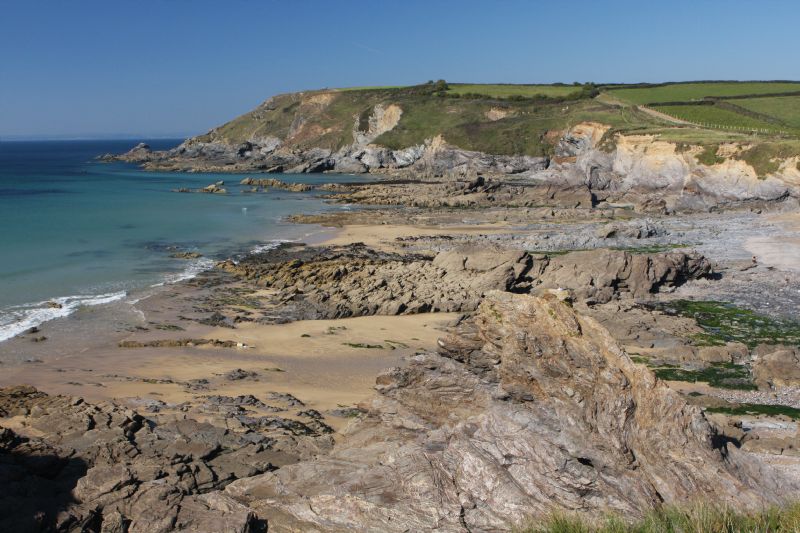 This section of the coast path takes you from a traditional fishing village, over a sand bar separating the sea from a freshwater lake, past a monument to the crew of a wrecked frigate, through An SSSI containing a Geological Conservation Review Site with examples of rare plants listed in the Red Data Book, past the Cliffs of Hell to a most unusual Parish Church and two beaches which have been featured in the latest adaptation of Poldark, before passing ancient barrows before reaching Poldhu Cove.

1. Park at the car park in Porthleven.

2. Walk out along the left side of the harbour towards the sea, passing the pubs, shops and galleries.

The road becomes cobbled. This section of road was severely damaged during storms in the late 20th century when huge waves sent spray into the air above the clock tower near the pier. Do not venture out onto the pier if the sea is rough as it is so exposed you could be washed into the sea.

Adjacent to the pier is an area called Little Trigg Rocks. At high water you often see surfers on the reef here.

3. Follow the road around to the left. Stay on the road above Porthleven Sands.
When you reach a fork in the road take the right fork and walk out along Loe Bar Road.

An area of rock on the beach below Parc-an-als Cliff is known as Western Tye.

4. Continue along the road past a building which was formerly the Tye Rock Hotel.

The building was constructed in May 1883 by Irish labourers for local landowner, JP Rodgers of Penrose. At that time it was known as Rockville. During the Second World War it was used by the U.S. Army and the 29th Infantry Division 1st Platoon.

5. Continue along Parc-an-als Cliff. As the road turns into a pot-holed track to the Parc-an-als car park you pass above an outcrop of rock known as Eastern Tye.

6. The path now enters a small car park. Caca-stull Zawn is in the cliffs below you.

Zawn is a Cornish word for a chasm. The cliffs here are of geological interest.

7. Follow the coast path out of the back of the car park as it zig-zags up the cliff.
When you reach the top of the cliff the path ascends again to make a brief detour around a collapsed section of coast path.

In the area around Vellin-gluz Rocks there are the remains of mine workings including mine shafts. Keep away from shafts and ensure dogs are on leads if your pet is likely to wander too close to a shaft.

The path provides easy walking along the top of the cliffs. The area is owned and managed by the National Trust. The path can also be cycled but take care to dismount where the NT signs indicate as the path narrows on its final approach to Loe Bar.

You will soon reach Bar Lodge.

8. There is a fork in the path with the left hand path heading further into the Penrose Estate, where there is a circular walk around Loe Pool.

9. Keep to the right of the lodge. The coast path down descends onto Loe Bar.

Loe Bar Beach is unusual in that it forms the barrier between a large freshwater lake and the sea. The sea here is very dangerous. The beach shelves very steeply and there are strong currents. Do not enter the sea here.

Spend some time enjoying Loe Bar Beach. The bar is home to a variety of coastal plants including Sea Holly (Eryngium maritimum). If you walk to the edge of Loe Pool you can enjoy views inland and watch birds on the pool. Our dog enjoys a drink and paddle at the edge of the pool and many dog owners allow their dogs to swim in Loe Pool.

10. After exploring Loe Bar continue across the sand in the direction of the white cross - a monument to the crew of the Anson.

The HMS Anson, a naval frigate, launched in 1781, saw action in the American War, French Revolutionary Wars and the Napoleonic Wars before being wrecked on Loe Bar on the 29th December 1807. While sheltering from a storm, her first anchor cable snapped at 4am, followed by a second one at 7am, leaving her out of control. Her captain attempted to beach her but this failed and she was pushed onto rocks. The mainmast broke, falling onto the beach. Many lives were lost, possibly as many as 190, including the captain. His body was recovered three days later and taken to Falmouth for burial. The remaining bodies were buried on the cliffs in unconsecrated ground.

The monument was erected in their memory in 1949. A local man, Henry Trengrouse, witnessed the disaster and as a result invented a Rocket life-saving apparatus which was developed into the Breeches Buoy.

11. Keep right after visiting the monument and ignore the lane to the left to stay on the coast path. The walking is fairly easy, passing above a continuing strip of sand.

You will see the remains of old quarrying activity along the path. After a short distance you can see a farm house just inland of the path. Looking down onto the beach you can see Blue Rocks. The hamlet of Chyvarloe is inland.

You are now walking above Gunwalloe Fishing Cove Beach.

The village of Gunwalloe is inland.

The long strip of sandy beach extends all the way to Gunwalloe Fishing Cove.

12. The coast path descends towards the cove.

If the tide is low you can enjoy Gunwalloe Fishing Cove beach for a while before ascending the path onto the other side of the cove. Inland is the hamlet of Chyanvounder and a pub if you need refreshments.

13. The path passes to the left of a house called Park Bean (from the Cornish words ‘Parc’, meaning a ‘field or enclosure’ and ‘bean’, the corrupted form of ‘byghan’ meaning ‘small’).

This area is part of a Site of Special Scientific Interest (SSSI) which extends all the way from Baulk Head to Mullion. It is noted for its geology and its flora and fauna. Much of the coastline here is owned by the National Trust.

15. Walking along Park Bean Cliff on your seaward side is Park Bean Cove and Fabey’s Hole (a feature in the cliff). Just inland of the path here you will see a white castellated building. Just after these buildings the path runs adjacent to the road for a short distance.

On your right is an area below the cliffs called Halzephron Cove. There is an area of sand here.

This area is of great importance geologically for the study of the complex relationships between the Devonian rocks and the mechanics of the emplacement of the Lizard ophiolite, an igneous rock consisting mostly of serpentine.

Halzephron comes from the Cornish words ‘als’ meaning ‘cliff’ and ‘efarn’ meaning ‘hell’, literally the cliffs of hell and so called because of the number of shipwrecks along this particular stretch of coast which cost many lives.

16. Continue along the path.

As you walk along Halzephron Cliff, Green Rock is below you.

17. After a short distance, the coast path turns away from the road near a small car park. Follow the path onto Pedngwinian.

This spectacular, towering headland is over 200ft (60 metres) high and has an unusual shape - a body with two pincers. An archaeological discovery was made here of a barrow containing three urns each capped with a flat stone.

18. After Pedngwinian follow the coast path to the left. You soon reach Jangye-ryn Cove.

Take some time to relax and explore the cove. The cove is very important geologically. It contains excellent examples of folding and tension gash veins and has been known to yield rare Devonian plant fossils. Sediments include black shales, sandstones mud or siltstones (turbidites), which were deposited in the Gramscatho Sedimentary Basin.

Jangye-ryn is also known as Dollar Cove, named after the silver Spanish dollars that have been found here in the past. These are believed to be from the wreck of a 18th century Spanish Galleon, the Rio Nova. The ship was carrying two and a half tons of silver coins from Spain to the Bank of England when it was wrecked here during a storm in January 1787. The vessel was split in two loosing its cargo into the bay.
Coins found have dated from 1765 to 1777.

Jangye-ryn has become famous for a more recent phenomenon. The popular BBC series produced by Mammoth Screen, Poldark, uses the cove as a filming location for a scene from series two. Filming took place in September 2015.

If you are walking the coast path with your dog you will be pleased to hear that Dollar Cove is dog friendly all year round. Our dog had great fun playing on the beach.

19. After visiting Dollar Cove follow the coast path onto the lane opposite Winnianton Farm.

There is a seasonal cafe here and toilets. A National Trust pay and car park is located behind the farm.

The Manor of Winnianton is mentioned in the national survey of land carried out in 1086, the Domesday Book.

Just ahead of you on the right is Gunwalloe Church dedicated to Saint Winwaloe. Its position is unique in Cornwall, with its tower separated from the main building and tucked into the hillside.

Church Cove, Gunwalloe’s main beach lies just beyond the church. A popular Lizard peninsula beach which was used as a filming location for the latest BBC production of Poldark. Church Cove was featured in series one. Relax and enjoy the beach and a visit to this lovely church after completing this section of the coast path. If you are walking with your dog please note that dogs are not allowed on Church Cove Beach during the summer months.

20. Leave Gunwalloe Church Cove by walking across the back of the beach if it’s summertime and you are walking with a dog.

21. Follow the coast path up the hill as it skirts the golf course belonging to Mullion Golf Club.

Near the coast path are the remains of three bowl barrows. The northern barrow is c.33ft (10m) in diameter, 3ft (1m) high and has a small central hollow. The central barrow is 42ft (13m) in diameter, up to 3ft (1m) high and has a central hollow, where it has been excavated. The southernmost barrow mound measures 39ft (12m) in diameter and is 4ft (1.2m) high. On its eastern edge, it has been damaged by a road, and there is a small early excavation trench on its western side. All three barrows are Scheduled Ancient Monuments.

22. Follow the path across the cliff and it soon descends to Poldhu Cove.

If you wish to travel to the start of the walk by bus there are buses to Porthleven from Penzance, Helston and Falmouth. Please see timetable for full details.

Bus service U4 operates between Penzance, Helston and Falmouth.
Service provided by First Kernow. During the summer months the services are available 7 days per week.


Do you have information of a historic or community interest about Porthleven to Poldhu Cove - Walk - Cornwall Coast Path which you would like featured on this page please email us with your information. 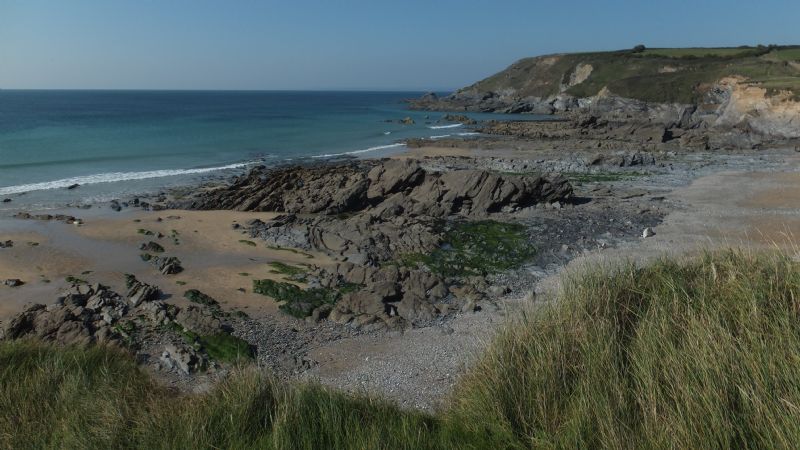