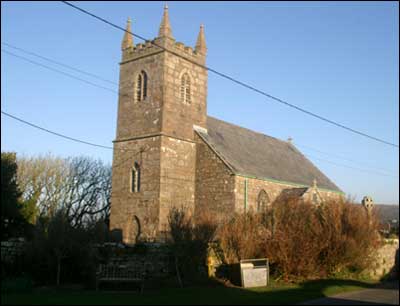 Morvah village and parish stand near the north coast of the Land's End Peninsula with a history stretching back thousands of years.

The name Morvah is believed to derive from the Cornish Morveth meaning 'a place by the sea'.

The Parish Church of Morvah is the only one in Cornwall dedicated to St Bridget of Sweden and therefore attracts numerous Swedish visitors. Some of the ornamentation within the church is of Swedish manufacture. The tower dates from the 14th century while most of the current building was erected in 1828.

IN the Giant's Field in Morva still stand some granite fragments which once constituted the Giant's House. From this we see the Giant's Castle at Bosprenis, and the Giant's Cradle, thus perpetuating the infancy of the great man, and his subsequent power. The quoits used by this giant are numerous indeed. This great man, on the 1st day of August, would walk up to Bosprenis Croft, and there perform some magical rites, which were either never known, or they have 'been forgotten. On this day,--for when thus engaged the giant was harmless,--thousands of people would congregate to get a glimpse of the monster; and as he passed them,--all being seated on the stone hedges, -- every one drank "to the health of Mr Giant." At length the giant died, but the gathering on the 1st of August has never been given up, or rather, the day shifts, and is made to agree with Morva Feast, which is held on the first Sunday in August.

A Morva farmer writes:-- "A quarter of an acre would not hold the horses ridden to the fair,--the hedges being covered by the visitors, who drink and carouse as in former times. Morva Fair is, however, dying out."

The parish-clerk informed me that the giant had twenty sons; that he was the first settler in these parts; and that he planted his children all round the coast. It was his custom to bring all his family together on the 1st of August, and hence the origin of the fair. Whichever may be the true account of the cause which established the fair and the feast, these romances clearly establish the fact that the giants were at the bottom of it.

The above notices were collected for me in Morva by the late C. Taylor Stephens, author of "The Chief of Barat-Anac," and "some time rural postman front St Ives to Zennor." Their connection with the traditions of Jack and Tom will be evident to every reader.


A Pasty Festival is held at Morvah every year on the first Tuesday of August. This recently established event is a revival of Morvah Fair which used to be celebrated annually at the same time of year.


Do you have information of a historic or community interest about Morvah which you would like featured on this page please email us with your information.

Location:
Located in West Cornwall near the North coast of the Land's End peninsula, Morvah is easily accessible from the B3306 St Ives to St Just road.
IntoCornwall Area Map Land's End Peninsula

Businesses
in or around Morvah