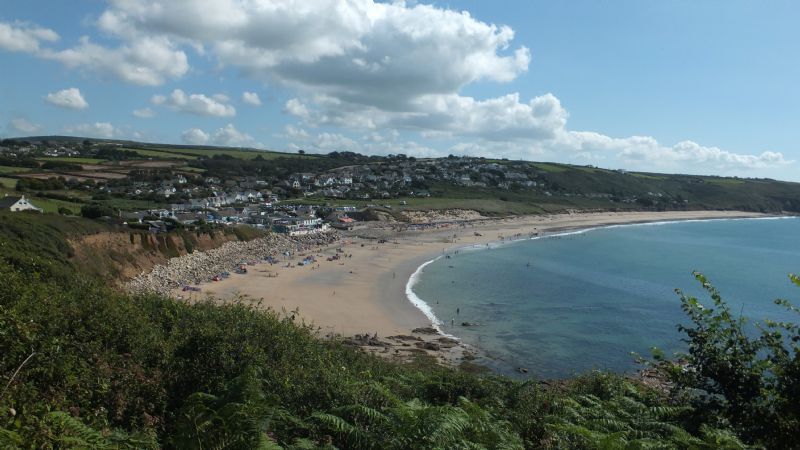 This section of the coast path takes you from a famous smuggler's cove, along cliffs with fascinating geology, past a sandy beach and a rocky cove to a long beach popular with surfers.

Bessy's Cove is named after the former kiddlywink keeper, Bessy Burrow, who kept a beer house here on the cliff above the cove.

This cove and the name of the general area of Prussia Cove were formerly known as Porth Legh (Slab Cove) but in the 18th century, the association of the area with the activities of the famous smuggler, John Carter, the notorious 'King of Prussia', earned it its current name.

The area off Prussia Cove is popular for diving with some great dives for intermediate novices. One large rocky island has a tunnel running through it. Conger eels, pollack and trigger fish can be seen.

The Carters often clashed with the Revenue men and the brothers even had a number of cannon on the rocks above the cove which were often fired at the Revenue ships . Perhaps this ordnance gave Battery Point its name.

2. Continue down the track leaving Bessy's Cove on your right.

You soon reach the buildings of Porth-en-Alls House.

This listed building was built in 1911 in the Romantic Arts and Crafts style, designed by Philip Tilden. It stands in Porthlea an echo back to the original Cornish name of Prussia Cove. King's Cove stands directly in front of the building and is a private beach.

3. Continue downhill. You will soon catch a glimpse of Coule's Cove through the trees. Cross the ford. To your right is a path down onto the beach at Coule's Cove. You may wish to explore the beach.

At low tide the beach has many rock pools. A stream flows onto the right side of the beach. Just above the beach are a row of seven cottages. They were built in 1826 by the Coastguard to help detect and deter smugglers. A lone house stands above them. This was built in 1885 for the former Archdeacon of Cornwall, du Boulay, when he retired.

4. Back on the coast path above Coule's Cove. Follow the path in front of the coastguard cottages.

You are now walking on Puffer Cliff. This area is of interest to geologists (Grid Ref: SW 5598 2817) with the remains of a fine grained sandstone bed in the slates at its eastern end.

Kenneggy Sands beach is below you. It is currently difficult to access due to rock falls. There used to be a rope ladder and a metal ladder to get to the beach but this is closed. Access is by climbing across rocks from Coule's Cove at low tide only.

There used to be many mines in the Kenneggy area. Evidence of the richness of the mineral deposits can be seen. The copper lode which made Wheal Grylls famous is exposed here. The green staining on the beach is caused by copper. The waste tip of the former Wheal Speed Mine is nearby. The hamlet of Lower Kenneggy is just inland. The name Kenneggy is believed to mean 'marshes'.

7. The path descends and you cross a stream. This area is often quite marshy.

You may wish to explore the beach. On your right is a gully in the rocks. This goes down to Pestreath Cove (SW 5670 2813). You can only access this tiny beach at low tide. Take care when walking through the gully as the rocks can be very slippery.

On the beach, water pours from an adit belonging to the former Wheal Speed. The adit extends into the cliff for a considerable distance but do not explore old mine workings unless you are with a group who have a good working knowledge of the conditions within the mine. There may be sumps covered by rotting planks or hidden by water on the adit floor and there are certainly shafts so do not enter. The mine became part of the St Aubyn and Grylls workings which were being worked between 1862 and 1868. 681 tons of Black Tin, 890 tons of Copper ore and 15 tons of Arsenopyrite were produced. The mines are connected underground and the remains suggest that mining took place here much earlier than the mid 19th century.

The name 'Pestreath' is something of a puzzle but could be 'pesk' meaning fish and 'treath' meaning sand.

8. Back on the coast path you now climb a little as you head towards Hoe Point.

You are now walking through a Site of Special Scientific Interest (SSSI). Folly Rocks are designated for their geological interest. An 18 metre granite porphyry dyke (elvan dyke) can be seen.

Sydney Cove is the name given to the western end of the beach as far as the stream. The area beyond is sometimes known as Hendra Beach but normally the whole beach is known as Praa Sands.

Praa comes from the Cornish words, 'pol' meaning 'pool' and 'wragh' meaning 'hag' or 'witch'. Its name was first recorded in the 14th century.

The beach is very popular for surfing. During the period from 1st October until Easter Sunday it is dog friendly and a favourite place for walking.

Praa Sands is of interest to geologists as this mile of coast is one of the most complete Quaternary sequences in West Cornwall. It has been designated as a Cornwall Regionally Important Geological / Geomorphological Site (RIGS). Due to erosion and movement of sand, the exposures are constantly changing but include possible multiple raised beaches, a complex head sequence, Holocene peat and coastal dunes. At the western end of the beach the raised beach deposits contain at least two distinct stratigraphic beach units. One of these appears, on the basis of Electron Spin Resonance (ESR) dating, to be the oldest so far found in Cornwall.

Behind the dunes which back the beach is Praa Green. On the eastern side of the green is a memorial to the pilot and crew of a Sunderland aircraft which crashed on Praa Sands beach in 1943. Everyone survived thanks to Colin Walker, the pilot, who received a Distinguished Service Order (DSO) and the people of Praa Sands played their part by taking the airmen in and giving them medical care.

Praa Sands has toilets, a bar/restaurant, cafe, shop and other facilities. Buses drive into the village.

Bus Service U4 between Penzance and Helston operated by First Kernow


Do you have information of a historic or community interest about Prussia Cove to Praa Sands - Walk - Cornwall Coast Path which you would like featured on this page please email us with your information. 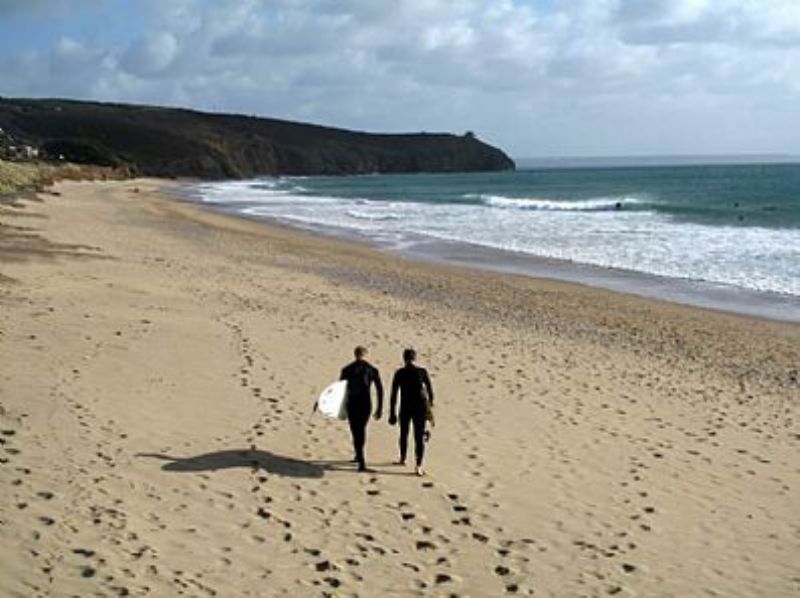