Temple is a small village in the parish of Blisland on Bodmin Moor.

Its name is from the the refuge built by the Knights Templars in the 12th century (c.1120) for pilgrims and travellers, en route to Jerusalem and the Holy Land.

When the Templar Order fell out of favour the building passed into the hands of the Knights Hospitallers in 1314 and remained under their control until the dissolution of the monasteries by Henry VIII.

At the turn of the 20th century it was a curacy of Warleggan and in 1934, the parish of Temple was incorporated into Blisland parish.

Stands within the Deanery of Trigg Minor, and the Hundred of Trigg.

Temple Church is a Grade II listed building. It contains several references to its links with the Knights Templar, including a cross pattée in the east window and a depiction of a mounted knight in the north window of the church tower.

Temple Church became famous for performing marriages without banns or licence (similar to Gretna Green in Scotland) after the Marriage Act was passed in 1753.

The church was dedicated to St Catherine of Alexandria and formed part of the medieval preceptory of Trebeigh.

In 1774 when the church first came under episcopal jurisdiction this practice came to an end and the church fell into ruin. The roof caved in and killed a homeless person who was sheltering inside.

By the mid 1800s, Temple village was mostly deserted with a population of twelve in 1861 and the church had a tree growing out of its floor. On the 29th January 1882 a final service was held by the Reverend J Brown.

In the 1870s with the expansion of the china clay industry, people returned to Temple and by 1891 the population had risen to 51.

In 1883 the ruined church was rebuilt by Silvanus Trevail on the foundations of the old church using much of the old materials and it was consecrated.

In 1896 the historian, Arthur Langdon recorded that eight stone crosses were to be found within the parish of Temple, all within the churchyard. Some of these have since been built into a small outbuilding to the south of the church.

In 1934 the parish was incorporated into Blisland parish.


Do you have information of a historic or community interest about Temple which you would like featured on this page please email us with your information. 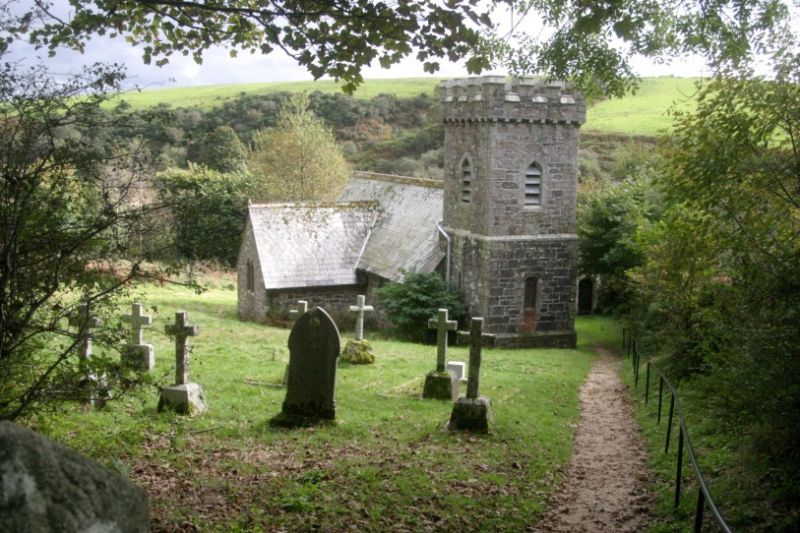 Businesses
in or around Temple

Churches
Ghost Hunting
'10 of the Best'
Guides to Cornwall