This walk is intended for walkers who want to enjoy the Kynance Cove to Lizard Point section of the Cornwall coast path and make it a circular walk.

Park at Lizard village where there is a large car park. Donations for parking to be placed in the collection box.

1. Leave the car park walking towards the public toilets and then bear right onto the public footpath to Kynance Cove (sign posted).

2. Walk along the tarmac road which will turn into a track near a group of houses. Look for the right fork (sign posted) and follow the path.

After a while the path drops down through some bushes into a small open area.

3. Follow the path up a gradual slope and cross the stiles as you head towards the large white building. On joining the road walk for a while before you pass 'Carn Goon' bungalow.

4. Continue along he road into the National Trust car park and walk down the footpath into Kynance Cove.

Kynance Cove is spectacularly beautiful and often described as one of the most beautiful beaches in the world. Its rocky islands, arches, caves and blowholes bear interesting names - Enys (Innis) Vean or Lion Rock, Asparagus Island has two blowholes at certain states of the tide - the Devil's Letterbox and Devil's Bellows, Gull Rock, The Bishop, Steeple Rock. Caves include the Ladies Bathing Pool, the Drawing Room and the Parlour. Together these stacks and arches form the largest outcrop of exposed serpentine in the UK.

5. There are two routes to leave Kynance Cove.

a. If the tide is high then leave from behind the beach cafe passing Tor Balk following the track to the right. You will meet a road. Turn right and walk along the road for a short distance until you see another track leaving the road on your right. This will take you back to the coast path.

b. If the tide is lower you can walk straight up from the back of the beach. This is a reasonably steep climb up from Kynance Cove, initially with steps and then a path leading towards the National Trust car park. As you walk up the hill a sign directs you to the right and leads you up another series of steps to the cliff-top and the coastal footpath.

6. After walking passed the the car park don't forget to look back towards Kynance Cove for a lovely view of the beach and its rock formations.

There is an excellent view from Yellow Carn but be careful as there is a very steep drop from the cliff.

7. Now return to the path and proceed towards Pentreath Beach.

This is the long rocky beach in front of you, often frequented by a few surfers. The beach has an alternative name of Boiler Bay.

As you look inland you be able to see Lizard village. As you begin walking along the cliff above Pentreath Beach if you look down the cliff you will see a large area of fallen cliff face. This is Holestrow from the Cornish words 'als' meaning cliff and 'trough' meaning broken. A massive landslide exposed excellent quality serpentine which has been used by local crafts people for carving into lighthouses and other serpentine ornaments.

8. The path is level for a while and then there is a slow descent towards to end of Pentreath Beach.

Looking back at the start of the beach you can see the Lion Rock and Enys Vean from the Cornish words 'enys' meaning island and 'vean' meaning little.

You will soon reach Carn Caerthillian, a great place to sit and admire the view. Choughs are often seen looking for insects in the short vegetation along this stretch of coast.

Carn Caerthillian, cove and valley are a National Nature Reserve.

9. After admiring the view continue along the coast path as it descends into Caerthillian Cove.

When you reach the top you can look down to see the rocky ledges known as Crane Ledges. On the 20th June 1935, the United States tanker, D.L. Harper ran aground on Crane Ledges in fog.

11. Continue along the coast path.

The next small cove is Holseer Cove. Specimens of the minerals Analcime and Illite have been found here. The large mass of rock which is almost detached from the coastline has the appearance of a giant frog. A series of small rocks off Holseer Cove are known as Scathe.

Venton Hill Point is the next landmark.

In its more recent history, Old Lizard Head has been the site of many shipwrecks. In September 1886 the Suffolk, an UK registered 2924 ton steamship, ran onto the rocks with her cargo of tobacco, wheat, flour, resin, timber and over 160 bullocks. The crew were rescued by Polpeor and Cadgwith lifeboats.

Some of the bullocks managed to get ashore and were held in quarantine at nearby Caerthillian Cove. Those bullocks who did not make the shore were slaughtered where they stood and sold. The wreck was sold for £11. The Quadrant, a large black rock lies off Old Lizard Head.

13. Continue along the coast path.

You are now entering Pistol Meadow. Today it is believed that this has nothing to do with guns but is from the Cornish word 'pistyll' for waterfall. In the 1800s it was thought that it was named from the huge number of fire-arms that were found when the Royal Anne was wrecked.

The meadow contains the mass graves of 207 victims of HMS Royal Anne which was wrecked on the Stags, a collection of rocks which create a dangerous reef running to 0.5 mile south of Lizard Point. The Stags terminate with a rock known as Men Hyr. The bodies were washed ashore and buried in a series of pits with twenty to thirty bodies in each pit.

A stream crosses Pistol Meadow and cascades onto the beach below. Pistol Ogo, meaning Waterfall Cave is located on the foreshore below the waterfall. The cave and waterfall are best viewed by boat.

At Polpeor Cove you can see the remains of the old Lizard Lifeboat Station. Local fishing boats would haul up in the cove bringing their catch of pilchards ashore for salting and storing.

Many of the rocks off Lizard Point are named: Barges Rock; Taylor's Rock; Man of War - The Man of War Gneiss, at the southern end of Lizard Point, are the oldest rocks on the Lizard at 500 million years old. They are metamorphosed granite belonging to the old super continent Gondwanda’s collision zone. They are exposed mainly in off-shore reefs and appear to have intruded the Old Lizard Head Series by lit-par-lit injection of quartz and feldspar; Shag Rock; Labham Rock; Vellan Drang - rocky islets extending from Lizard Point; Shag Rock - 500 million years old; Men Par; Mulvin; Clidgas Rocks; ; Pen Ervan; The Dales; Enoch Rock. Over the centuries, many of these rocks have been responsible for wrecking a great number of ships.

14. To return to your parking place at Lizard village take the road which leaves Lizard Point and walk uphill for a short distance until a footpath begins running parallel to the road, join this path to walk back to Lizard village.


Do you have information of a historic or community interest about Kynance Cove to Lizard Point Circular Walk - Walks in Cornwall which you would like featured on this page please email us with your information. 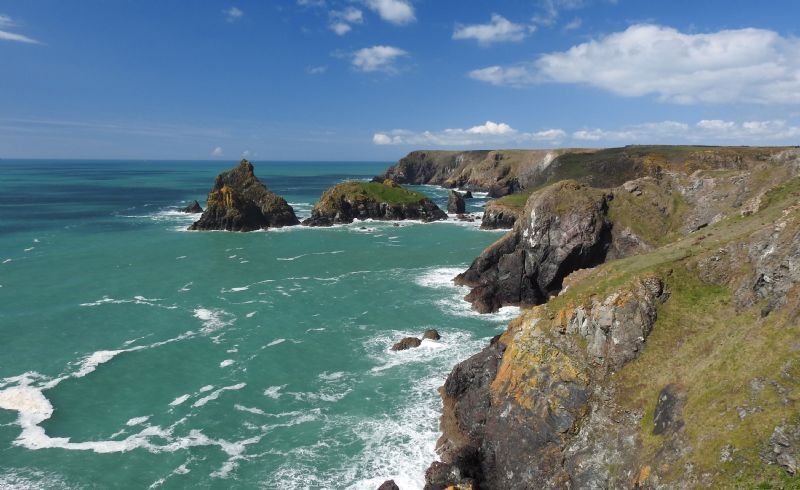