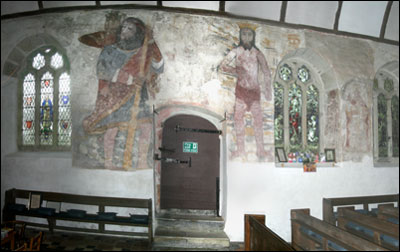 Breage is a village and parish situated between Penzance and Helston, named in honour of its saint, an unassuming place but which is home to a 12th century church which houses a remarkable collection of frescoes dating from the 1400s.

The church of St Breaca lies in the heart of the village dedicated to an Irish saint from the 6th century. St Breaca is celebrated in the parish annually on the third Monday in June and there is an additional festival on December 26th.

On Tregonning Hill, in the parish, was the site of an ancient settlement dating from c.6th century. It is believed that this was the original site of St Breaca's church. St Breaca is thought to be one of a number of Irish Saints who arrived in the Hayle area. Breaca fled here after her party was attacked.

The remains of an Iron Age hill fort known variously as Castle Pencaire, Pencaer, Caer Conan and Loban Rath have also been noted as the place where St Breaca is thought to have fled to. There are no remains visible of the oratory which the saint established here.

Breage was also associated with the mining of tin and copper in the 19th century. Great Work Mine (West, sometimes known as Wheal Breage, was as deep as 26 fathoms below adit by 1864. Water wheels powering tin stamps would have been seen at surface. In just one year alone, 1872, Great Work (West) sold 29 tons of tin at £2545, a lot of money in the 1800s.


Do you have information of a historic or community interest about Breage which you would like featured on this page please email us with your information.

Location:
Located near to the south coast of Cornwall between Penzance and Helston

Businesses
in or around Breage 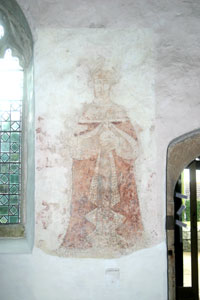 Churches
Geology & Mining
'10 of the Best'
Guides to Cornwall