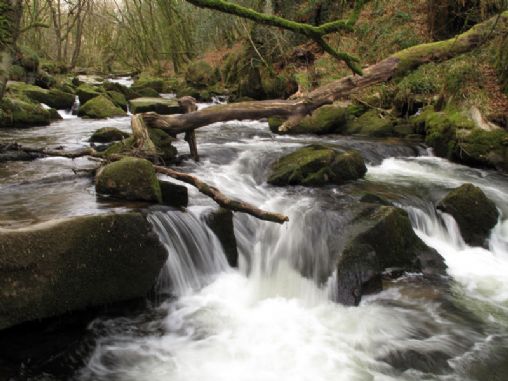 Golitha Falls are a series of spectacular cascades through a steep-sided valley gorge on the upper reaches of the River Fowey.

As the Fowey winds it way from its source on Bodmin Moor to its estuary at the harbour of Fowey(pronounced Foye) it passes through this picturesque wooded gorge between Draynes Bridge and Treverbyn Bridge.

Golitha Falls and the ancient woodland through which they flow is a National Nature Reserve of great importance for its lichens, liverwort and mosses. Over 50 species of liverwort grow here and 98 species of moss, some of which are quite rare. The reserve is open all year and is a free admission site.

The reserve contains some open meadows but mostly consists of Sessile oak and mixed oak and ash woodland. In one area of the reserve is an avenue of old beech trees.

Golitha Falls has a diverse flora supporting a variety of plants including those which thrive on thin soils such as common cow-wheat, bilberry, wavy-hair grass, greater woodrush and hard fern and those which enjoy deeper, richer soils, bugle, tormentil, valerian, bluebells, etc. The wildflowers are best seen between April and July.

In addition to its flora, Golitha Falls is also a home to a large variety of wildlife including several species of bat - noctule, brown long-eared and lesser horseshoe - over 30 species of birds which include dipper, nuthatch, treecreeper and buzzard, all of whom breed on the reserve - lepidopteran species include butterflies such as the silver-washed fritillary, green veined white, meadow brown, marbled white, gatekeeper, small skipper, ringlet and speckled wood and over 80 species of moth.

Management of the Golitha Falls woodland by coppicing dates back to the time of the Doomsday book and possibly earlier. Coppicing has been re-introduced on a small scale to demonstrate how this sustainable management style can still be used by woodland owners today.

There are several well marked trails in the nature reserve, including those with access for people with disabilities and for wheelchair users. Look out for the sign at the main entrance to the reserve and for information boards along the trail.

There is a large car park near the entrance to Golitha Falls NNR.


Do you have information of a historic or community interest about Golitha Falls which you would like featured on this page please email us with your information.

Access to the reserve by car is via minor roads from the A38, A30 and B3254. The car park is north east of the reserve near Draynes Bridge.

Businesses
in or around Golitha Falls 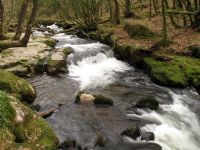