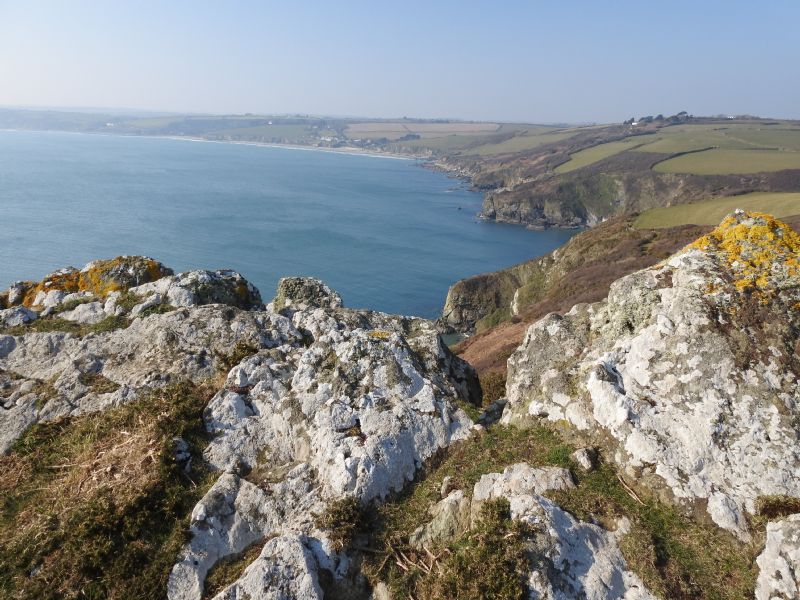 View from Nare Head towards Pendower and Carne Beaches


This section of the coast path takes you from Pendower Cove through part of the Gerrans Bay to Camel Cove Site of Special Scientific Interest through 400 million years of geological history, past beautiful sandy beaches, rocky coves and even a wartime ‘bunker’ to the tiny fishing village of Portloe. With stunning views along the walk and plenty of opportunity to sit and enjoy them, or have a picnic, this is an ideal walk for a sunny day.

The parking area is just above the beach if you have followed the short lane from the A3078. These directions are from that car park.

(There is alternative parking behind the beach if you have driven down the minor road from the centre of Veryan. There are two Second World War pillboxes near the car park behind the beach.)

Walk down the slope towards Pendower Beach. Follow the path past the deserted hotel and around to the left to cross the wooden footbridge over the stream. After crossing the stream you may wish to spend some time exploring the beach and its fascinating geological formations.

Just after the stream you can make a detour if you wish to walk up the wooded valley towards Veryan, passing Lower Mill and Melinsey.

Retrace your steps to continue the coastal walk. If the tide is low you can walk along Pendower Beach to Carne Beach. The two beaches become one at mid to low tide.

If the tide is high or rising, use the coast path along the low cliffs behind Pendower beach. You will pass Spires Point. You are now above Carne Beach. The path skirts around a hotel At the east of Carne Beach is an area known as Gidley Well. The stream here flows through a number of geological faults. You can see white veins of calcite and quartz running through the rocks. After exploring, leave the beach and walk back to the road. Walk up the hill for a short distance then follow the sign to walk up some steps and onto the coast path.

The cliffs here are quite low. Follow the path through fields. Inland is the hamlet of Carne.

You pass a small cove. Continue along the path crossing a couple of stiles. The path crosses several more stiles as it climbs up to Pennarin Point.

There is a cave below you, known as Tregagles Hole. Jan Tregagle (Tregeagle) is famous in Cornish folklore. When storms rage in this place it is said that it is the moaning and wailing of the haunted soul of this 17th century character, who sold his soul to the devil.

The path descends steeply into Parodoe Cove down a flight of wooden steps.

Paradoe Cove pronounced 'Perada’ lies at the end of a wooded valley. It is possible to make a detour here to walk inland, up through the wooded valley. We will feature this walk separately.

Follow the path across the footbridge. As you start to climb you pass Mallet’s Cove A ruined and deserted fisherman’s cottage stands on a spur of land above the sea. This was the home of a 19th-century fisherman called Mallet , who lived during the week in this lonely spot, fishing from 'Mallet's Cove' below, then returning at weekends to his wife at the village of Veryan, a few miles (kilometres) inland. Eventually he emigrated to Australia - leaving his wife in Cornwall.

From Paradoe Cove the path climbs quite sharply. When you come to the intersection of paths continue upwards. You will pass Malmanare Point. Continue following the path upwards. You will reach Shannick Point. After a further short climb you reach the flat expanse of Nare Head.

In the 16th century this headland was known as Penare Point from the Cornish words ‘pen’ meaning ‘headland’ and ‘ardh’ meaning ‘prominent’.

Take some time to relax and look back at the amazing views across the bay to Pendower Beach, where you started your walk. On the tip of Nare Head there are exposures of greenstone rock. Take care as the cliffs here are very high and very sheer. Keep dogs on a lead as there can be livestock grazing on the headland.

The coast path cuts across the headland. You may wish to leave the path for a short while to enjoy the views from the tip of Nare Head.

Just off Nare Head is an islet known as Gull Rock. Beside it is a line of rocks which protrude above the surface of the water - Inner Stone, Middle Stone and Outer Stone. The hazardous Whelps reef is here with many more rocks hidden just below the surface waiting to catch out unaware vessels and their crews. One such vessel was the German barque, SS Hera, which was wrecked here on the night of January 31st/February 1st 1914. The ship broke into two pieces when it sank. Of the 24 crew only 5 survived and only 12 of the bodies were recovered. Their grave is in Veryan churchyard. It is believed to be the longest grave in the UK at 75 feet in length.

As you continue your walk around Nare Head you will see a grassed over World War 2 decoy bunker. The large field immediately behind the headland was a World War Two Starfish site, providing a decoy for Falmouth. The site would have had mock buildings, streetlights and everything to make it look like a small town so German bombers would mistake it for Falmouth and drop their bombs thus saving Falmouth casualties and damage.

In 1963 the bunker site became a Cold war early warning Royal Observer Corp observation post for detecting radioactive fallout. The access hatch and ventilation turret are visible. The ROC stood down in 1991. The National Trust have restored the bunker and a few times each year, it is opened to visitors.

As you continue your walk you pass a natural spring - Venton Vaden, ‘Venton’ is the Cornish word for a ’spring’.

Haine’s Rock is below. The cliffs here are very high so take care and do not walk to close to the edge. Cross a stile a short distance from the cliff edge. Sheep are often grazing on these steep cliffs and if you approach the cliff carefully and look down you can see them below on Rosen Cliff. There are a number of crags here for rock climbers including Rosen Traverse and Lemoria.

A rock formation here is known as Old Man’s Face.

Lemoria Rock and Horse Rock are below.

The view as you descend to Kiberick Cove is stunning. Green fields lie below you and there is a flat area of grass known as Slip Field, which appears to have been the result of a collapse a long time ago. On the day we walked here sheep were grazing on the slopes and the field above the beach. Follow the path down to Kiberick Cove. Dogs are allowed on this beach from 1st November but from Easter day they are banned.

You may wish to spend some time on this rocky beach. At the end of the cove is Coggan Rock.

Return to the coast path and follow it around Blouth Point and the area of cliffs known as The Blouth. The land here and for much of this walk is owned by the National Trust.

Parc Caragloose Rock is below.

The coast path descends almost to Parc Camels Cove. If you wish to explore please note that this sheltered beach is dog friendly.

The house you can see on the cliff is Broom Parc. It was used as a location for the TV series, The Camomile Lawn. There are a fine stand of Monterey Pines. The house is owned by the National Trust and run as a bed and breakfast. The house is made from mud bricks which have been rendered over. The mud was extracted from the River Fal near Ruan Lanihorne.

After Broom Parc the path follows the lower edge of a field before leading into an enclosed area of small trees which hug the clifftop. Continue along the path around Manare Point. Manare Rock is below. The area of coast from Manare Point to Caerhays is a Geological Conservation Review site and Site of Special Scientific Interest (SSSI).

After a short distance the path emerges from the scrub and you are presented with a great view of Portloe from the area of Watch Rock.

The path then begins to descend The Jacka, a prominent ridge.

Cuckoo Rock and The Zawn are below you with with fine exposures of the highly complex geological formations characteristic of this area.

The path passes Jacka Point and after a further descent you reach the pretty village of Portloe. The TV series, ‘Wild West’, starring Dawn French and Catherine Tate was filmed here. Portloe used to have a lifeboat stationed here but the difficulty in launching the boat from this narrow inlet was so great that it was never used.


Do you have information of a historic or community interest about Pendower Beach to Portloe - Walk - Cornwall Coast Path which you would like featured on this page please email us with your information.