Wadebridge, in Cornish, Ponswad, is an historic town standing on the River Camel near Cornwall's north coast.

Standing on the tidal reaches of the Camel, Wadebridge was once an important port. The town was known as Wade in the 1300s. It is now part of the Camel Trail for cyclists and walkers which stretches from Padstow on the coast inland to Bodmin Moor.

It is thought that there has been a river crossing here at Wadebridge since before the Roman period and that the fording of the river was so popular that chapels were built on each side of the River Camel to cater to the visitors and pilgrims - St Michael's on the St Breock side and King's Chapel on the eastern, Egloshayle side.

The bridge in the town centre was built in the mid 1400s and is one of the finest medieval bridges in England. A vicar, the Reverend Lovibond of Egloshayle is credited with its construction. It is said to be built on wool. This has been interpreted literally in that the piers of the bridge stand on wool which does in fact solidify when wet. The alternative view is that the money for the building came from wealthy sheep farmers. A toll was charged for using the bridge.

In 1646, during the English Civil War, the strategic importance of the bridge prompted Oliver Cromwell to send 500 Dragoons and 1000 horsemen to take the bridge for the Parliamentarians.

In the mid 1800s, the Bodmin and Wadebridge Railway from Wadebridge to Wenfordbridge and its branch line to Bodmin was built by local landowner Sir William Molesworth of Pencarrow. The railway cost £35,000 to build.

The line opened on the 30 September 1834 and was intended to carry sand from the Camel Estuary to inland farms for use as fertiliser.

The locomotive Camel pulled carriages containing 400 passengers. This railway is notable for being one of the first in Britain to carry passengers.

In 1967 the last passenger train left Wadebridge railway station following the proposals by Dr Beeching for the closure of many railways.

Today, the railway has been transformed into the Camel Trail, a scenic and extremely popular cycling and walking trail.

The parish church of Wadebridge is situated at St Breock, down a quiet tree-lined lane and at Egloshayle on the east of the river.

Sir Goldsworthy Gurney, scientist and surgeon, who invented the Bude-Light, lived in Wadebridge from 1814 to 1820. A street (Goldsworthy Way) has been named after him.

Michael White, journalist, associate editor and former political editor of The Guardian was born in Wadebridge in 1945.

Andrew Ridgeley, member of the pop music duo, Wham! and his partner Keren Woodward, from the band Bananarama,

Sergeant Steven Roberts, the first solder to die in the invasion of Iraq, was born in Wadebridge.

Tristan Stephenson, mixologist and bartender, is a Wadebridge resident.

Jago, the children's book illustrator is a resident.

Of archaeological interest are two Bronze Age standing stones (in Cornish 'menhirs') which stand on St Breock Downs. The first stone is named as Men Gurta and is the heaviest erect standing stone in Cornwall, weighing over 16 tonnes. (Location: Map reference SW 969683).


Do you have information of a historic or community interest about Wadebridge which you would like featured on this page please email us with your information. 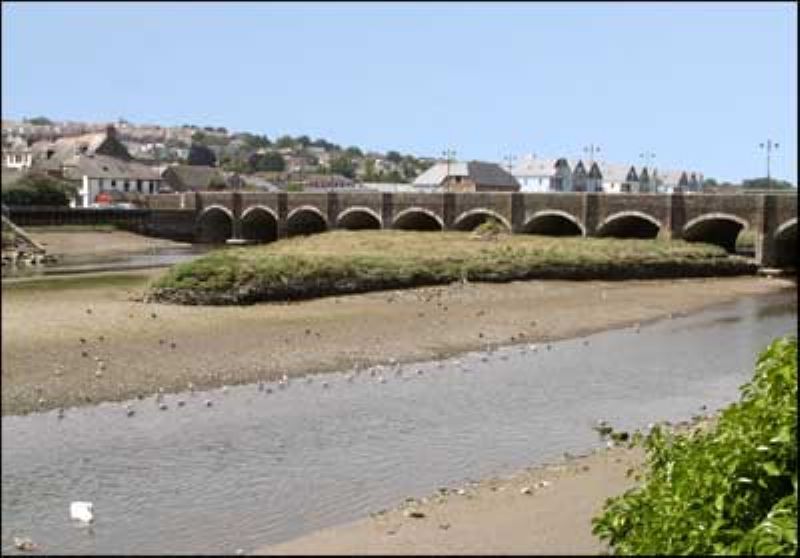